Kenya Airways holds off suspending flights to China over coronavirus 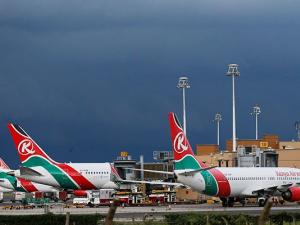 Kenya Airways has said it will not suspend its flights to China following an outbreak of the deadly coronavirus.

This comes even as British Airways suspended flights to Beijing and Shanghai after the UK government advised against non-essential travel to the Asian country.

Kenya has also issued a travel advisory urging its citizens to refrain from making any unnecessary travels to China.

The national carrier has said that it is closely ‘monitoring’ the situation before it takes the next step.

The KQ announcement comes as the Kenyan ambassador to China Sarah Serem called on the airline to suspends flights to the country until the virus is contained.

“We are monitoring this on a very regular basis, as frequently as every one hour. We will make a decision in collaboration with the government on when and if when we should suspend the flights,” KQ acting chief executive officer Allan Kilavuka said on Wednesday.

On Tuesday, a Kenyan passenger, on board a KQ flight from China, was quarantined at the top referral hospital in Nairobi over the suspected deadly virus.

“This is very important to us, not just for the China route but an entire network. It is a global issue and airlines are looking at it very seriously. We have taken precautionary measures right from boarding, to ensure that we do not allow on board anyone who hasn’t been cleared by port health bureau of China. So anyone from Wuhan city in China will not be allowed on our flights,” Mr Kilavuka said.

“On top of that we are sterilising our aircrafts while our crew use protective gear on and off the flight while in China. We are in close collaborations with the port health at Jomo Kenyatta International Airport (JKIA) and Guangzhou where we fly to as we seek to protect our passengers.”

The Kenyan student who arrived from China with flu-like symptoms was placed under isolation at the Kenyatta National Hospital (KNH) in the capital Nairobi as a precautionary measure and to allow further investigations, the health ministry said on Tuesday. The ministry added that further laboratory tests were being undertaken, with comprehensive results expected on Wednesday.

Officials said the 22-year-old student had been in Wuhan, the Chinese city that is the epicentre of the coronavirus outbreak, but had not contracted the deadly disease.

Several countries are evacuating their citizens out of the Chinese city among them United States and Japan as death toll rose to 132 and a first case reported in Middle East on Wednesday.

Chinese health officials also reported that the number of confirmed cases have jumped to 5,974.