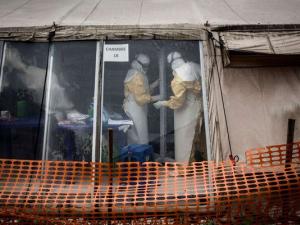 A second person has died of Ebola in Uganda as neighboring Kenya intensifies screening at its border.

The grandmother of a five-year-old boy who died of Ebola passed on at Bwera General Hospital in Kasese District, western Uganda, on Wednesday evening. The boy died on Tuesday night at the same hospital where an isolation facility was established for Ebola patients to be treated.

The Ebola outbreak which has ravaged the neighboring DRC for the last one year was Tuesday confirmed in Uganda in the western border district of Kasese.

Dr Aceng said seven more people who came from the DR Congo, including the boy’s parents and younger sibling, are suspected to be infected with the virus and are at the isolation facility.

Meanwhile, Kenyan health officers at the Busia One Stop Border Post on the Kenya-Uganda border are on high alert.Screening for the killer Ebola virus was intensified on Wednesday.

More than 300 travelers have been screened since the outbreak was reported, Port Health Services Officer Joshua Arusei told the Nation on Wednesday. He said officers were examining all travelers from Uganda, Rwanda, Burundi, the Democratic Republic of Congo and South Sudan.

“We are also checking travel records using passports before allowing the travelers into the country,” Mr Arusei said, adding that the department was ready to respond to any case.

“We are ready to attend to emergencies at Busia County Referral Hospital just metres away. All suspected cases, especially for those found with temperatures above 38 degrees, must be quarantined,” he said.

Mr Arusei urged the public to use designated routes so that officials can examine them and prevent infections and an outbreak.

The Kenyan Health ministry issued a statement, saying it had issued an alert to all health workers and the public for enhancement of surveillance measures.

Besides issuing the alert and heightening screening, the ministry and other actors have:

The three were admitted in isolation when they presented with Ebola like symptoms shortly after arriving at Munyaga border crossing in Western ward in Butogota town council in Kanungu District from DRC on Wednesday morning.

​They are suspected to have crossed back to DRC using the porous borders. Besisira says the escape of the trio has triggered panic in the district.