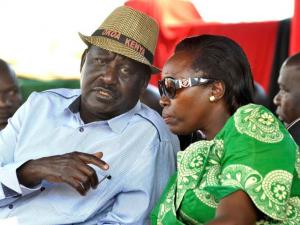 Speaking at the Kenyatta International Convention Centre on Monday, Mr Odinga praised the former Justice and Constitutional Affairs minister for her zeal and human rights record.

"I needed a true Joshua on my corner, one who will not be a turncoat. After a long search and reflection, together with consultation, I have arrived at the decision that the holder of this position must be a woman," Mr Odinga said ahead of the May 16 deadline for presidential candidates to submit the names to the electoral commission.

In her acceptance speech, Ms Karua said she was happy to deputise Mr Odinga, congratulating her other running mate hopefuls.

"We are going to do more in the area of social-economic rights. Together, we can finally bring to life the dreams deferred," she said.

Ms Karua joined politics in 1992 and was elected MP for Gichugu Constituency and became the Democratic Party's legal affairs secretary in 1993.

She served as Minister for Water Resources Management and Development in the late President Mwai Kibaki’s administration between 2003 and 2008 before she was appointed Minister for Justice, National Cohesion and Constitutional Affairs, where she served until April 6, 2009, when she resigned from the government.

In a separate press conference, Mr Musyoka wished Ms Karua well. "I wish Raila's running mate Martha Karua well. We have agreed to go our separate ways. I told Raila the decision to pick Karua will be met with a lot of opposition. OKA will be alone and very soon Wiper will be launching its own manifesto," he said.

While unveiling Mr Gachagua as his running mate, the DP described him as an astute debater, a principled, resilient and fearless fighter for the right cause. “Gachagua is my friend whom I’ve worked with, especially on that bottom-up economic model and we started that journey together. He understands people’s issues; he is passionate about ordinary people,” Dr Ruto said.

Mr Gachagua served as district officer in Molo and Laikipia during the Kanu rule when provincial administrators wielded a lot of power and their orders were law. He says he has equipped himself with enough experience and can run a government without any push and pull, citing his personal assistant role to Mr Kenyatta and former President Daniel Toroitich arap Moi’s Head of Public Service Philip Mbithi.

Central region
The two deputy president hopefuls are both from the vote-rich Mt Kenya region, which has one of the highest numbers of registered voters in the country.

The elections will be held on August 9.