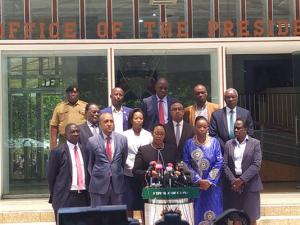 Kenya will on Saturday receive the reagents for coronavirus as it steps up preparedness levels against the deadly disease.

The reagents, laboratory mixture, and other crucial kits are necessary in testing for and identifying the virus.

Lack of the supplies has forced Kenya to send samples of suspected cases to the National Institute for Communicable Diseases laboratory in South Africa.

The outgoing Health Cabinet Secretary Sicily Kariuki said the tests for all the seven suspected cases of the coronavirus have all turned negative but maintained that the country was still on high alert.

Ms Kariuki noted that the government has set aside an additional 120-bed isolation centre at the new wing of Mbagathi Hospital in Nairobi.

The new ward adds to the 60-bed isolation ward at the Kenyatta National Hospital.

“We are continuing to build the necessary capacity as a precaution. We expect the reagents and all the necessary test kits tomorrow [Saturday],” said Ms Kariuki.

“We have also heightened our surveillance in the 34 points of entry.”

Foreign Affairs Principal Secretary Kamau Macharia restated the government’s position that it would not evacuate the 75 students in Wuhan, the Chinese city that is the epicentre of coronavirus while saying that “they are safe where they are.”

Coronavirus had by Friday killed 638 people and infected over 31,000, with most of the victims from mainland China.

Through their lobby group, Kenyan students studying in Wuhan, in a letter to the Foreign Affairs office, had asked for urged for urgent intervention stating that they were running out of food supplies and facing psychological torture.

“…To date, the embassy has not responded to our letter nor the raised concerns. We are in total darkness. Worse of it all, with each passing day the situation in Wuhan is getting unbearable. Some of our students are totally without food, while some are going into depression due to fear and uncertainty surrounding this issue,” said a letter signed by officials of the Kenyan Students in Wuhan Association