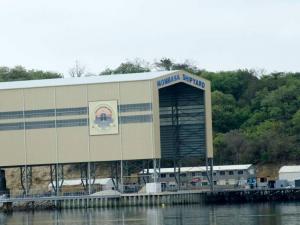 Kenya and Tanzania recently formed shipping lines, but are struggling to establish themselves without own vessels. Tanzania’s bid to sell its disused vessels has been a struggle, with few people coming forth to buy, and leaving it with an unwanted burden of storage.

Read: Kenya launches shipyard as it eyes ship building, repairs in Sub-Saharan Africa
As a result of increasing operating costs, Zanzibar Shipping Corporation, Tanzania’s shipping line is auctioning three of its vessels, leaving it with none of its own. Zanzibar Shipping Corporation, in May this year, floated a tender to dispose of three public vessels MV Maendeleo, MT Ukombozi and MV Mapinduzi 1. Those vessels are still unsold.

According to documents, the assets are being disposed through the international competitive bidding procedures specified in the public procurement and disposal of public assets.
Interested bidders were required to inspect the MV Maendeleo in Mombasa, Kenya at African Marine Dockyard while MV Mapinduzi 2 and MT Ukombozi are at Zanzibar port.

This is the second time ZSC is disposing the three vessels without anyone willing to purchase them due to its neglected state. In 2017, the national shipping corporation had floated the same tender in its bid to overhaul the Shipping Company. It found no buyer.

MV Maendeleo which has a capacity to carry 600 passengers and about 600 metric tonnes of cargo has been at Mombasa African Marine since 2017 after it was said to be written off due to lack of maintenance and its old state.

Despite the tender closing in June, ZSC is yet to get buyers of the three vessels again. Last year in September, Zanzibar President, Dr Hussein Ali Mwinyi announced his government's decision overhaul the state-owned shipping company by first and foremost auctioning all its loss-making vessels in what he termed as “time to start afresh".
Julius Nguhulla, a maritime consultant in Dar es Salaam told The East African he agrees with the decision by the Zanzibar government to sell the ships because they were unfit. The MV Maendeleo and Ukombozi were built in 1980. Mr Nguhulla Zanzibar Line ran a series of loss-making voyages due to high fuel costs.

In Kenya, government's effort to revive the Kenya National Shipping Line isn't bearing much fruits forcing it to partner with Mediterranean Shipping Corporation to handle key government cargo and operate the second container terminal at the Port of Mombasa.

Two years ago, the Kenyan government unveiled plans to revive KNSL, with hopes that it would have the ability to contribute $3 billion annually to the economy and create 6,000 jobs. However, the process has gone cold over concerns that this may not take off.
https://www.theeastafrican.co.ke/tea/business/kenya-tanzania-struggle-to...