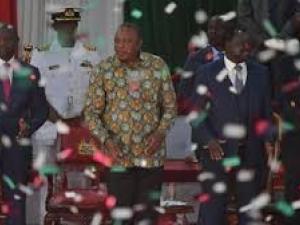 Kenya’s electoral commission has said that late changes to election laws and political interference could erode its independence and compromise its operational ability to preside over a free and fair election in 2022.

In a statement released on November 18, the Independent and Electoral Boundaries Commission (IEBC) opposed a proposal in the report of the Building Bridges Initiative (BBI) taskforce to have political parties appoint commissioners, saying it would expose the agency to unwarranted attacks by politicians and dent its image.

“The nomination of commissioners by political parties, as recommended by the BBI report, in a country with negative ethnicity and highly competitive politics and where most parties hardly last beyond a five-year cycle, will grossly undermine the independence of the commission,” said the IEBC in the statement signed by its chair Wafula Chebukati.

Changing election laws with less than two years to the election, he said, would leave the commission with too little time to prepare adequately for the polls, which early campaigns suggest will be hotly contested.

The proposed role for political parties in appointing electoral commissioners has emerged as one of the most divisive issues in the BBI reforms report.

The release of the report late last month set Kenya on the path to a possible constitutional referendum next year.

Civil society groups, the clergy and a faction of the ruling Jubilee Party loyal to Deputy President William Ruto have also voiced their opposition to the involvement of political parties in the hiring of IEBC staff, saying it would undermine the integrity of elections.

The groups have been pushing for changes to the document to, among other things, have the current system where an independent panel selects electoral commissioners retained.

Politicians loyal to President Uhuru Kenyatta and opposition leader Raila Odinga, who entered an unlikely co-operation agreement in 2018, want a role in the IEBC for political parties.

The leaders are citing similarities with the reforms introduced in 1997 to try to make the management of the elections transparent.

Concerns about the growing divide over the BBI report may have prompted the two leaders to cancel the Thursday launch of the collection of at least one million signatures that are needed to trigger a parliamentary debate on the referendum bill.

The current spotlight on the IEBC mirrors the suspicions that have marred preparations for each of Kenya’s past three elections, whose outcomes have been disputed in the streets and at the Supreme Court.

In the run-up to the last elections in 2017, the opposition accused senior administration figures of manipulating the procurement of election management software and kits from a foreign company to enable a vote rigging scheme.

The IEBC denied the allegations and the onus was on the opposition to produce irrefutable evidence to back its claims.

However, reports of some biometric voter registration kits failing to work at polling stations, and a sharp rebuke of the commission by the Supreme Court in a September 2017 decision overturning President Kenyatta’s victory, left the electoral body with egg on its face.

In the past three years, Mr Chebukati has sought to repair the image of the agency that is operating with less than half of the board members after four of the seven commissioners resigned.

An audit of the commission’s procurement contracts in 2018 reportedly unearthed irregularities that led to the exit of its former CEO, Ezra Chiloba.

The commission’s board is expected to be fully constituted in the coming months to enable it hold the proposed constitutional referendum before August 2021.

With the political fault lines likely to outlive the probable referendum, Kenya is approaching the line that Mr Chebukati says should not be breached for the IEBC to deliver a free and fair election.