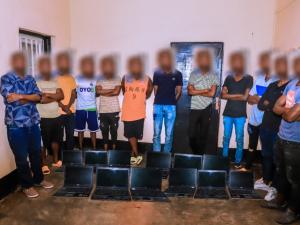 Rwanda National Police (RNP) has arrested at least 12 people in City of Kigali, who were changing the International Mobile Equipment Identity (IMEI) of stolen mobile phones.
The IMEI is a 15-digit unique number allotted to every GSM mobile and enables, for example, to track a phone that may be stolen or compromised.

RNP spokesperson, Commissioner of Police (CP) John Bosco Kabera, said that the group was arrested in coordinated Police operations conducted on Monday, May 23, in Downtown and Nyabugogo.

“Cases of people, who snatch or steal mobile phones are reported almost every day, especially in City of Kigali. Although in some cases, some of the stolen cell phones are recovered ; most times it becomes hard to track these handsets because there are people, who work with thieves to unlock them and change their original serial numbers making them undetectable.

So, Police has started operations targeting individuals or groups that invest in these criminal activities to change serial numbers of stolen mobile phones,” CP Kabera said.
He added that the arrest of the 12 people followed investigations and information provided by members of the public on specific individuals involved.

One of the suspects ; Joseph Ngendabanga, a trained automotive technology technician and automobile mechanic, explained how they were changing the IMEI.
“The software we use helps you in password hint and to unlock a phone, change the serial number and to format different types of handsets. To change a serial number, I have to first know its original unique serial number by pressing *#06#. This helps me to create a new one in my software with 15-digits of my choice but I must start with 35 in my new created IMEI,” said Ngendabanga.

CP Kabera said that these are continuous operations targeting this chain, including thieves, those who change mobile phone serial numbers and people, who buy and sell these phones in their shops. He added that there are other people, who are yet to be arrested.
https://en.igihe.com/news/article/kigali-police-bust-ring-changing-seria...