Killings in eastern Congo may amount to crimes against humanity - UN 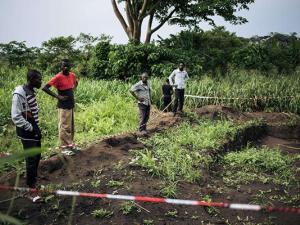 Killings, rapes and other violence committed by an ethnic armed group in northeastern Democratic Republic of Congo against a rival group may amount to crimes against humanity and possibly even genocide, the United Nations said on Friday.

The attacks in mineral-rich Ituri province have mostly targeted Hema herders, who have long been in conflict with Lendu farmers over grazing rights and political representation.

Since September 2018, Lendu armed groups have increasingly become more organised in carrying out attacks against the Hema and members of other ethnic groups such as the Alur, the UN human rights office said in a report on its investigation.

Army and police forces have failed to stop the violence, it said, calling on Congolese authorities to address the root causes of the conflict.

“The barbarity that characterises these attacks—including the beheading of women and children with machetes, the dismemberment and removal of body parts of the victims as trophies of war—reflects the desire of the attackers to inflict lasting trauma to the Hema communities and to force them to flee and not return to their villages,” the report said.

“The violence documented...could contain some elements of crimes against humanity through murder, torture, rape and other forms of sexual violence, pillage and persecution,” it said

At least 701 people have been killed and 168 injured during inter-ethnic violence between the Hema and Lendu communities in Djugu and Mahagi territories from December 2017 to Sept 2019, the report said. At least 142 people have suffered acts of sexual violence, it added.

Most victims are from the Hema community, but the UN investigators said they had also documented acts of reprisals by some members of the Hema communities, including the burning of villages.

The crimes were committed while he was military chief of the Union of Congolese Patriots (UPC) militia in eastern Congo in 2002-2003, which targeted Lendu people for expulsion. Hundreds were also killed