Kwibuka25: Over 25 heads of state expected to join Rwandans 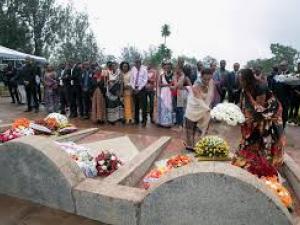 At least 27 Heads of State and Government from Africa and beyond are expected to join Rwandans during the 25th commemoration of the 1994 Genocide against the Tutsi.

Among those invited include East African Community leaders and heads of Regional Economic Communities from Africa.

According to the State Minister of Foreign Affairs Olivier Nduhungirehe, the list of invitees includes former US president Bill Clinton, Former British Prime Minister Tony Blair, Prime Minister of Belgium and President of France among others.

Rwanda is set to mark the 25th Commemoration of the 1994 Genocide on April 7. Preparations of the commemoration are underway with some works having started as early as December last year.

This year’s commemoration is themed around the youth with activities themed focusing on the youth, especially with regard to teaching them about history.

Among the events around the commemoration include an international conference in Kigali from April 4 to 5th convening about 500 experts, politicians, international organisations from all over the world.

In a recent interview Foreign Affairs Minister Dr. Richard Sezibera said that there are ongoing efforts by the diplomatic missions to combat genocide denial across the world which has been on the rise.

“Denial is part of genocide and it is our conviction that these people who deny or revise the genocide or propagate genocide ideology need to be combated in many ways: through the law, there are laws here that criminalise genocide ideology, denial and revision; there are some outside there who are involved in all these,”

“We need to therefore fight it by law here and by explanation outside through exposure. We are not afraid of naming and shaming them wherever they are. And third, mobilising the international community to understand that genocide denial and revisionism is part of genocide and encourage them to enact legislation in their own countries against Genocide denial and revisionism,” he said.

On the invitation of President Macron of France for the commemoration activities, Sezibera said that Rwanda has always extended an invitation to the European nation over the years.

“The relations between Rwanda and France are good at the moment we are happy with the commitment of president Macron,” he said.

By the New Times