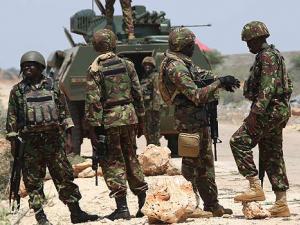 At least 10 people were killed on Saturday evening in a deadly attack carried out by suspected Al Shabaab militants attack near the Kenya-Somalia border.

Nairobi News has established that the attack took place just a few hours after an intelligence was released showing that a big number of militants had been sighted near the Kenya-Somalia border.
“Suspected Al Shabaab sighted on September 28, 2022, crossing from Somali to Kenya and divided into 3 sectors. Be vigilant as they want to emulate killing spree of security agents,” an intelligence report seen by Nairobi News read in full.

It has been established that the suspected militants of the group that is linked to terrorist group Al Qaeda attacked a company that was drilling a borehole in the town of Gariley which is located near the Kenyan border.

Police officer loses firearm after being drugged
Locals who spoke to the media from the affected region said that the militants attacked the crew that was drilling the borehole, burnt the equipment and the workers. Six of the Al Shabaab militants were also reportedly killed by security forces.

This happened just two days after leaders from the North Eastern region raised concerns over drought in the area. Already, the United Nations (UN) has warned that famine is looming in the area.

Al Shabaab has in recent weeks burned houses, destroyed wells and beheaded civilians in other parts of central and southern Somalia. The attacks and the group’s demands for tax payments despite the drought, have pushed some residents to take up arms for fight the militants.

Kalonzo: Need advice on winning elections? Talk to me
This comes at a time when President William Ruto has said that there is need to withdraw Kenya Defense Forces (KDF) troops from Somalia.

President Ruto said that the Kenyan troops operating in Somalia will start arriving in Kenya as soon as Kenya’s mission in Somalia is over.
“Those troops will come back home as soon as we are done with the assignments that we have in Somalia. The new Somalia president has a much clearer view of where we need to go and is more committed to fighting Al Shabaab,” President Ruto told the media just days after he was declared the winner of the August 9, 2022, General Elections.
https://nairobinews.nation.africa/at-least-10-killed-in-deadly-al-shabaa...