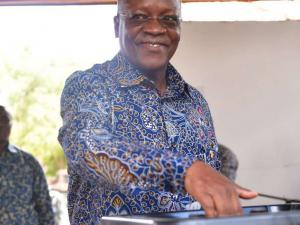 Tanzania's incumbent President John Pombe Magufuli was on Friday headed to a cruising victory in the recently concluded general election.

Early Friday, Magufuli had a wide lead, according to provisional figures announced by the National Electoral Commission.

As Magufuli turned 61 on Thursday, his ruling Chama Cha Mapinduzi party was heading to a landslide victory with provisional results indicating that only two MPs from opposition parties had been re-elected.

But the country’s western partners cautioned that claims of vote-rigging and intimidation could dampen any victory for CCM.

“Detaining opposition leaders is not the act of a government confident in its electoral victory. Maalim Seif and his colleagues should be released immediately,” US Ambassador to Tanzania Donald J Wright wrote on Twitter, referring to the nickname of Zanzibar’s opposition leader Sharif Seif Hamad. Hamad was detained on Thursday for calling for mass action against electoral irregularities.

The US government said the opposition and civil society groups had made “credible claims” of fraud and intimidation and that the wide margins of victory for CCM were raising doubts about the authenticity of the figures. Dr Wright said it was important for Tanzania to investigate claims of rigging to restore trust, heal divisions and respect the rule of law.

David Concar, the UK High Commissioner to Tanzania, said the credibility of the elections will depend on authorities taking up complaints and investigating them.

“As in any election, the credibility of the process, on Zanzibar & the mainland, will depend on electoral authorities following up on & investigating reports of irregularities.”

Some 28 MPs on CCM ticket were declared winners before any ballots were cast after their opponents were disqualified for failing to meet all conditions set by the electoral agency.

In the outgoing Parliament, CCM controlled the floor with 270 seats out of 384. It also controlled 81 of the 85 seats available in the House of Representatives in Zanzibar.

Opposition parties claimed the poll was marred by fraud and rigging.

Lissu lawyers wrote to the African Union and the Secretariat of the Commonwealth to investigate fraud and human rights violations "which have de-legitimised" the presidential elections.

Robert Amsterdam, from the Amsterdam and Partners LLP in London, asked international bodies to withhold recognition of results for not meeting standards.

"We have documented cases of ballot stuffing throughout the country, use of violence and intimidation including murder, rape and use of mercenaries, widespread irregularities, illegal disqualifications of candidates and sweeping unlawful arrests and detentions of poll monitors," Mr Amsterdam said in a statement, indicating the law firm had submitted documentary evidence to the continental body and the Commonwealth for action.

The allegations of fraud were dismissed several times by the National Electoral Commission while the Police denied killing any protesters, even though police chiefs said they had arrested dozens of opposition leaders including detaining the Zanzibar presidential candidate Hamad for calling for mass action.

While the African Union or the Commonwealth may take up the issue or even withhold recognition, they can legally not rescind a decision announced by the National Electoral Commission in Tanzania. In fact, Tanzanian law forbids any legal challenge on presidential election results. However, both organisations, to which Tanzania belongs, had issued strong statements calling for free, fair and credible elections while cautioning against violence.

"I call upon all electoral officials, political leaders and their supporters to play their part in ensuring a peaceful, transparent and inclusive process and hope that positive lessons learnt from previous elections will inform the conduct of this year's poll and ensure a credible and successful election for Tanzania and its people," Patricia Scotland, the Commonwealth Secretary-General, had said in a statement on voting day.

Moussa Faki, the Chairperson of the African Union Commission, too, called for peaceful, inclusive and credible elections.

Although expected to win, CCM has been accused of being favoured by Tanzanian authorities, claims both the electoral commission and the police denied.

The Panel of Eminent Persons under the Tanzania Elections Watch, a virtual observation group for the polls, said the actions preceding and witnessed on the voting day had left "questions on the credibility of the elections."

"The Panel expressed concern about recent events and reports observed on the election day which dampen the credibility of the electoral process," the TEW said in a statement on Thursday.

They cited internet shutdown, arrests and deaths, and complaints of harassment from opposition party agents as issues that raise questions.

They asked the electoral bodies to investigate complaints but called on political parties to engage in constructive dialogue.