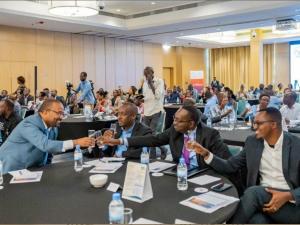 Rwanda joined the rest of the World to celebrate the World Hepatitis Day (WHD) with remarkable progress recorded in screening and treatment of cases of hepatitis B and C.

The celebrations were marked in Kigali, July 28, under the theme: “Rwanda Cares: The Last Mile Towards Hepatitis Elimination”.
The World Health Organization estimate both viral hepatitis B and C to cause 1.1 million deaths every year with 1 person dying every 30 seconds and 3.0 million new infections occurring every year .

In Rwanda, a national plan for Viral Hepatitis C (HCV) elimination was launched in December 2018, with the goal to screen 7 million people aged 15 years and above and to treat all positive cases, which aimed to reduce the HCV prevalence from 4% to1% in less than 5 years.
Throughout the years, Rwanda has made significant progress in implementing HCV control measures, including early screening of blood supply, training and enforcement of safe injection practices, the establishment of a Hepatitis program in 2011 and the publication of the first Viral Hepatitis National Guidelines in 2013.

Currently, Hepatitis B (HBV) and C testing and treatment services in Rwanda are provided at no cost and under a decentralization framework to enhance financial accessibility and geographical proximity to care.
This has resulted into about 7 million people tested for HCV and close to 60,000 treated for HCV and cured.

Over 4 million people have been tested for HBV and 7,000 people are on a lifelong HBV treatment and over 7,000,000 people including children and adults have been vaccinated for HBV.

This has seen the estimated prevalence of chronic HCV and HBV drop from 4% and more than 3% in 2015 to less than 0.39%and 0.35% respectively in 2022 .
“The cost of maintaining the gains and sustaining the response remains high and this is probably high time to recall for global health financing to invest in hepatitis elimination if we want to reach the set target by 2030”,Minister of Health Dr. Daniel Ngamije said.
https://www.ktpress.rw/2022/07/minister-of-health-toasts-significant-ste...