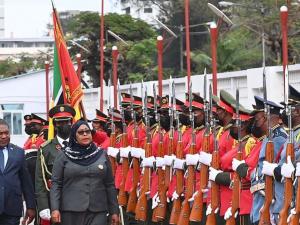 Tanzania and Mozambique have entered into new agreements to protect their shared border against an increasing terrorism threat caused by ongoing insurgency movements in northern Mozambique.

Presidents Samia Suluhu Hassan of Tanzania and Filipe Nyusi of Mozambique witnessed the signing of two memoranda of understanding (MoUs), one on peace and security and the other on defence cooperation, in Maputo on Wednesday as the Tanzanian leader embarked on a three-day state visit.

The two leaders also agreed to strengthen bilateral cooperation in other areas such as trade and investment, energy, tourism, and education, including introducing Kiswahili in Mozambican schools.

Speaking after the signing function at the Mozambican State House in Maputo on Thursday, the leaders said the new MoUs were necessary to enforce further border security protocols that have existed since 1980 but now face new challenges from the insurgency forces.

“There has been too much criminal activity along the border and terrorism remains a serious problem. It is a long border and stronger cooperation has become a critical necessity,” President Suluhu said.

A deadly insurgency erupted in northern Mozambique, near the Tanzanian border, five years ago. It has killed thousands and displaced hundreds of thousands.
But life now was "gradually returning to normal" after thousands of foreign troops from several African countries were deployed more than a year ago to quell the unrest, said Mozambican President Filipe Nyusi.

"The enemy is now operating in small groups trying to descend into the southern districts," Mr Nyusi said during their talks.

President Suluhu described the pact signing event as “an important step in moving forward.” The defence and security MoU was signed by defence ministers Stergomena Tax of Tanzania and Cristovao Chume of Mozambique.

Cross-border trade
President Nyusi emphasised the importance of contractual agreements to ensure that the fight against terrorism continued to be regulated within legal guidelines.
He said the new agreements also touched on issues such as handling cross-border search and rescue missions, drugs and human trafficking, pirate operations and minor tiffs between informal traders without causing diplomatic ripples.

“Mozambique is currently in the midst of an economic recession of sorts, we are going through a bad patch, and we don’t need more problems like that,” Mr Nyusi added.

According to a statement issued by Tanzania’s presidential spokesperson Zuhura Yunus, the two countries will focus on tapping new opportunities for mutual trade and investment in areas such as agriculture and agro-processing, fisheries, oil and gas, and mining.

The annual value of trade flows between Tanzania and Mozambique has dropped from an average of Tsh53 billion ($22.84 million) in 2020 to Tsh46 billion ($19.82 million).
They also agreed to revive a mutual student exchange programme and extend it for another five years. The programme went into a state of hiatus in 2015, having benefited 369 students.

According to Ms Yunus, President Samia also pledged Tanzania’s readiness to provide Kiswahili teachers to help establish a foundation for the language to be taught in Mozambican schools from the primary school level.

The Tanzanian leader arrived in Maputo on Tuesday night straight from Britain, where she attended the national funeral and burial of Queen Elizabeth II in London on Monday.
https://www.theeastafrican.co.ke/tea/news/east-africa/mozambique-tanzani...