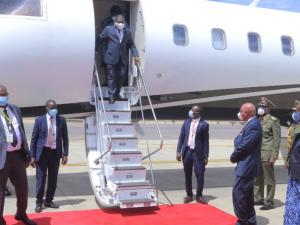 He was received at Entebbe International Airport by Foreign Affairs Minister Gen. Jeje Odongo and other Ugandan officials.

Mr Nyusi received a 21-gun salute on arrival at the airport and will hold bilateral talks with his host President Yoweri Museveni in the afternoon.

President Nyusi and President Museveni are set to hold discussions on strengthening historical ties, and political, economic, social and cultural cooperation between the two countries.

Mozambique and Uganda have enjoyed good relations of friendship, solidarity, cooperation and camaraderie since the national liberation struggle stemming from the 1970s during the days of Frelimo, as the country fought for independence.

According to President Yoweri Museveni, 28 of the soldiers who formed the Front for National Salvation, which later became the National Resistance Army before it became the Uganda People’s Defence Force, were trained at Montepuez, the second largest city in the province of Cabo Delgado, in Mozambique.

The same group comprised of a number of trainees, such as the late Fred Rwigyema, the founder of the Rwandan Patriotic Front, a group that later fought and captured power in 1994 in Rwanda.

In 2018, President Nyusi hosted Museveni in Maputo for official talks during a three-day visit, during which a general cooperation agreement on defence, tourism, diplomacy and trade was inked.

During that visit, Museveni said the Ugandan army had its roots in Mozambique.

The Mozambique Presidency says both Heads of State will assess the stage of bilateral cooperation, with emphasis on the decisions taken during Museveni’s last State visit to Mozambique.