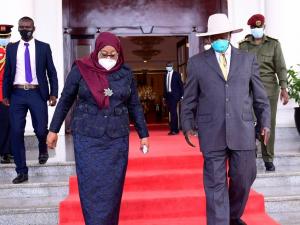 Ugandan President Yoweri Museveni has called the April 11 signing of the East Africa Crude Oil Pipeline deal between Tanzania and Uganda a "third victory" for them, saying the date is a sentimental one.

This was President Samia Suluhu Hassan's first trip outside Tanzania as head of State since she took oath of office on March 19, following the death of President John Magufuli.

“Forty two years ago, this same day, was when the Tanzanian troops of the 20th Division, under General David Msuguri, captured Kampala and enabled Ugandan army officer David Oyite Ojok to announce the fall of Idi Amin on Radio Uganda,” said President Museveni.

"At that very moment, with my rapidly growing Fronasa troops operating with another TPDF task force division under Major General Cyrus Mayunga, I was on the Mbarara front. Today, therefore, is a triple victory for Tanzania and Uganda… Ushindi wa mara tatu."

Speaking at State House Entebbe, Mr Museveni said the two countries have in the past shared military and political victories, and the oil pipeline deal is an economic victory.

He said that when the Tanzanian route became viable, a new consideration crossed his mind -- the historical contribution of Tanzania in the liberation of Uganda in both 1978-79 and 1985-86.

“On these two occasions, Mwalimu Nyerere played a very important role. In the 1978-79, TPDF played a major role in removing Idi Amin from power. In 1985-86, Mwalimu Nyerere gave us 5,000 riffles at the right time, just before the assault on Kampala starting on January 17, 1986,” he said.

On Kenya’s role, he said the two countries are brotherly, just as is the case with Tanzania.

However, he noted, historical factors touching on Tanzania make him feel indebted to it.

“I am, therefore, most satisfied that the project will make a modest contribution to the development of Tanzania. It cannot compensate for the huge sacrifice that Tanzania made for the defeat of Idi Amin, and the liberation of the whole of Southern Africa (Mozambique, Zimbabwe, Angola, Namibia and South Africa). It is just a modest contribution,“ he said.

"Moreover, this pipeline project might be the core of bigger developments if our brothers in Congo and South Sudan choose to use it for their oil, as the maximum it can carry is 230,000 barrels per day."

He added that the same corridor can take a return pipeline supplying Tanzanian and Mozambican gas to Uganda and the great lakes region.

The gas will be used to smelt the huge reserves of iron ore in Uganda, he said.