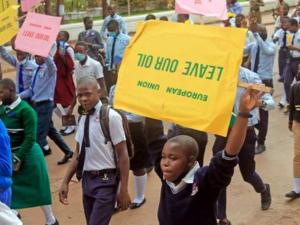 President Yoweri Museveni of Uganda this week sustained his tirade against those opposed to the planned East African Crude Oil Pipeline (Eacop).

“Some of these people are insufferable. You need to control yourself not to explode. They are so shallow, so egocentric, so wrong but they think they know everything,” he said, alluding to the September 15 resolution of the European parliament, sanctioning the project.

The president was speaking on Tuesday at the official opening of the Uganda International Oil and Gas Summit, held between September 17-28 at a Kampala hotel.
The summit brought together more than 400 participants from across 125 countries and international companies in oil exploration.

Political backing
President Museveni used the occasion to lampoon the West, and promised to ensure the project goes ahead.
He defended the environmental soundness of the project, saying it would be conducted within the law.

“They should calm down because this is a wrong battleground for them. We don’t take kindly to arrogance. The plan will be implemented according to schedule. And I hope our partners join us firmly,” he added.

The President’s speech was the latest assurance that the pipeline project between Uganda and Tanzania still has his political backing despite facing challenges from environmental activists and financing uncertainty.
“I encourage the oil companies to move on the two, the refinery and the pipeline,” President Museveni said.

On Thursday, students from across Kampala held demonstrations in the city with placards in support of Eacop and denouncing the EU. They marched to the offices of the European Union.

Irene Batebe, Uganda’s Permanent Secretary in the ministry of Energy, told the summit that all oil projects are compliant with regards to environmental and social impact assessments (ESIA).
She added that the country would abide by the mitigation measures provided in the ESIA as it progresses to development and production phases.

Museveni spoke while opening the pipeline project that has faced criticism by local and international environmentalists as well as human rights organisations, and now the EU Parliament, all threatening its implementation.

Those opposing say Eacop will produce 34 million tonnes of carbondioxide emissions per annum, destroy sensitive biodiversity including protected areas, and displace more than 100,000 people along the route in Uganda and Tanzania.

Oil refinery
Uganda also seeks to commercialise its oil by building a 60,000 barrels-of-oil-per-day refinery at Kabaale, which will cost $4 billion through a partnership with international companies led by the lead investor Albertine Graben Refinery Consortium. The flagship upstream projects in Uganda’s Albertine Graben remain on course for commercial production of oil in 2025.

This week, drilling equipment for Kingfisher Development Area was delivered, according to Chinese oil firm CNOOC.
On the eve of summit, CNOOC tweeted: “The rig is here! Shipments of the drilling rig have started arriving at the Kingfisher oilfield in Kikuube District. 18 containers will be delivered daily for the coming 3 weeks. The journey to first oil is in full force.”
The rig from China has been customised for the Uganda project and is expected to be set up and commence drilling this December, according to CNOOC Uganda Ltd.

Three-year schedule
The first rig for TotalEnergies’ Tilenga project is expected to arrive in Uganda in a few weeks.

The Tilenga project, operated by TotalEnergies, is a $4 billion investment, while CNOOC has invested $3 billion in Kingfisher. Along with the $5 billion Eacop, these upstream and midstream projects are key to the commercialisation of Uganda’s oil and gas.
https://www.theeastafrican.co.ke/tea/business/museveni-promises-to-ensur...