Museveni to spend over Shs 20b while teachers claim salaries 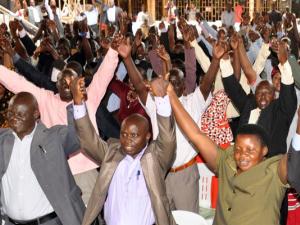 Ugandan parliament has approved Shs33 billion as additional budget for State House to run President Museveni's activities about four weeks to the end of the financial year.

The budget includes Shs17.6 billion for Mr Museveni's ongoing field tours countrywide, which he says are for sensitizing the public on poverty alleviation and Shs15.7b for classified expenditure. The supplementary request dated May 17 was yesterday tabled before Parliament's before the Budget Committee yesterday by Minister of State for Planning David Bahati.

According the documents tabled in Parliament, the money will be used for transporting, feeding and accommodating the President and his entourage.

The approval was done amid objections from the Opposition who claimed the President wants the money for early campaigns.

MPs Muwanga Kivumbi and Cecilia Ogwal opposed the expenditure, claiming the President's field operations should be funded by his NRM party since he is engaging in early election campaigns.

"You have to advise the President that if he is going for a nationwide campaign he should avoid NRM politics," Ms Ogwal said. In all the regions Mr Museveni has visited, he has been endorsed as the NRM sole candidate.

Meanwhile, in April 2019 the ministry of education said that at least 1, 342 teachers and Ministry of Education staff will not get their May and June salaries unless the Finance ministry approves the request for a supplementary budget.

Mr Aggrey Kibenge, the Ministry of Education undersecretary, confirmed that the permanent secretary, Mr Alex Kakooza, had written to Finance ministry seeking a supplementary budget of Shs1.3 billion to cater for 1,342 staff who include teachers and are likely to miss their June salary. Another 34 staff will miss their salaries on the May payroll.

In February, while responding to questions arising from a World Bank report on the country’s education particularly on teacher deployment, Mr Kakooza admitted that they had had challenges of teachers already on payroll being deleted without explanation.

He further told participants at the launch of the ‘Facing Forward Schooling for learning in Africa’ report that some of their staff were going to miss salary despite being on the payroll this financial year. He did not specify who would miss the salaries.