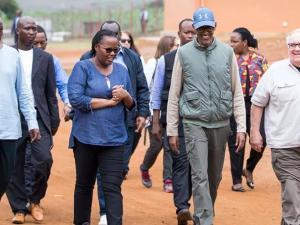 Nasho Irrigation Scheme, a joint investment by the Government of Rwanda and the Howard G. Buffett Foundation, has significantly increased the yields of farmers in the area and consequently bolstered their incomes.

This emerged during the inauguration of the facility by President Paul Kagame and Howard G. Buffett in Nasho Sector of Kirehe District.

Kagame said that by brining agriculture and conservation together, the parties had made a significant difference in many lives, not by giving hand-outs but rather by means of productivity.

“Agriculture and conservation have come together to make a big difference for so many lives, not just benefitting by receiving hand-outs but receiving best practice, different inputs from the investments that Howard you have made…I think the reward for you and all those who are doing their best to make this partnership as successful as it has been and continues to be,” he said.

The President added that farmers’ productivity was poised to increase even further through replicating best practices from the project.

He also pledged that the government would remain committed to ensuring that gains made are sustained going forward.

“If you can take it from three, four, five tonnes per hectare to close to 10, then it is only showing what is possible that everyone can do, and that is the spirit that characterizes what we have been doing or want to do... we also have the challenge to ensure this productive relationship never comes to waste at any point,” he said.

Kagame expressed gratitude to Howard G. Buffett for his friendship with Rwanda, dedication to working with the country and impact so far.

“Howard, I wanted to thank you for not only your friendship with this country of Rwanda and the people and myself but also for the partnership that has become very productive in this way,” he said.

Buffet said that the success had been possible from the cooperation with the Rwandan government throughout the project.

From the success experienced from the project, Buffet pledged further input through a 36KM road to be built from Nasho to Bugesera District to allow even closer collaboration between Rwanda Institute for Conservation Agriculture and the scheme.

The irrigation project, worth $54 million, also consists of a solar power plant with a capacity of 3.3 megawatts to power the irrigation system, with 2.4 MW battery storage unit installed, to provide electricity to pump water and reduce the burden from farmers.

The project has also constructed 144 houses to resettle households from areas under pivot irrigation and farm buildings.

The scheme was set up with an aim to improve on-farm productivity of crops through investments in proper land, water, and inputs utilization for enhanced food security among Rwandan farmers.

The project also aimed at ensuring access to and adoption of technologies that enhance agricultural value chains and conserve the soil.