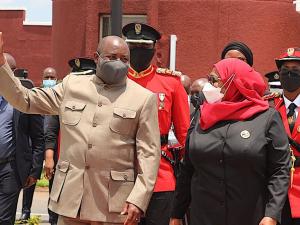 Dar es Salaam. Burundi President Evariste Ndayishimiye wrapped up his three-day state visit to Tanzania yesterday, highlighting several issues that define bilateral relations between the two countries, including CRDB Bank Plc’s role in industrialising the region.
The Burundi leader was also appreciative of how Tanzania’s Standard Gauge Railway (SGR) and the Port of Dar es Salaam were opening his country to international trading.
On Friday, President Ndayishimiye laid a foundation stone for the construction of a fertiliser factory in Dodoma, owned by Itracom Fertilizers Limited of Burundi.
The plant, which is financed by a CRDB Bank Plc loan, will have the capacity to produce 600,000 metric tons (tonnes) a year, and will create employment for 10,000 people.
“Financing construction of the fertiliser factory is yet another testimony that the bank is committed towards facilitating stronger bilateral trade and investment ties between our sister countries,” he said.
Speaking at the event, the CRDB Group CEO and Managing Director, Mr Abdulmajid Nsekela, said the bank - which has three branches in Burundi - has been providing financing for strategic government projects in Burundi and Tanzania.
Nsekela said CRDB - which is planning to open another branch in Gitega later this year - has also financed construction of the Fomi Fertiliser factory and a cement factory in Rutana in Burundi to which a $10 million loan was provided.
“Honourable Mr President, your presence here today to lay the foundation stone for the construction of the Itracom factory is testimony to stronger bilateral relations between Tanzania and Burundi. As a local bank with an international vision, CRDB Bank has a deliberate strategy to facilitate trade and investment relations in the East African region to boost economic growth and improve people’s lives,” he said.
He noted that, so far, the bank has invested $107 million in Burundi, spreaded across different sectors of the country’s economy - such as the Mpanda Hydro Electric Project. He In Tanzania, CRDB has also financed the Minjingu Fertiliser factory which is also owned by Itracom.
“In Tanzania, we are also Itracom’s bankers, providing all types of services and products including the financing of Minjingu Fertiliser factory located in Babati District where we have invested $12 million,” he said.
The bank - which has been in Burundi since 2011 through CRDB Burundi - will open a fourth branch in Gitega District later this year, and is a major taxpayer to the Burundi government in addition to creating jobs for Burundians, Nsekela said.
Meanwhile, President Ndayishimiye expressed optimism that the SGR project and improved Dar es Salaam Port through the Maritime Gateway Programme (DMGP) will provide transportation for Bujumbura cargoes.
“The construction of a railway that will reach Burundi from Uvinza has begun, and will proceed to Msongati and Gitega which is the political capital. We really appreciate the support of the Tanzania government,” he said after visiting Dar es Salaam Port.
Tanzania’s Works, Transport and Communications minister, Prof Makame Mbarawa, said improvement of berths numbers one to seven at Dar port have enhanced efficiency.
Imported cars in the first quarter of 2021/22 have increased by 36 percent, to 45,553 as compared to the 33,481 car imports in 2020/21.
“Received cargo increased by 15 percent, to 4.93 million tonnes from 4.28 million in 2020/21. Docked ships increased by 10 percent, rising from 1,053 to 1,163,” he said.
Prof Mbarawa also said that containers handled at the port increased in the first quarter of 2021/22 from 185,857 to 195,320 in 2020/21.
“In 2020/21, some 513,544 tonnes of cargo for Burundi passed thru’ the port, as against the 481,081 tonnes serviced in 2019/20,” he said.
According to him, the Tanzania Ports Authority (TPA) was committed to Burundian customers, ethically, diligently and at 24 hours a week.
The TPA board of directors chairman, Prof Ignas Rubaratuka, said TPA will prioritise Burundi cargoes, and he was able, willing and ready to meet, discuss and make decisions on issues of interests to all stakeholders and both countries.
“We call upon Burundian businessmen to continue trusting TPA ports in handling Burundi cargoes from and to global markets,” he said.
Tanzania’s Foreign Affairs and East African Cooperation minister Liberata Mulamula said that, during President Ndayishimiye’s first visit to Tanzania where he met with the late President John Magufuli in Kigoma last year, the Joint Cooperation Commission (JCC) held a meeting to deliberate upon issues of collaboration in the areas of trade, infrastructure, tourism, etc.
“This is a follow-up visit - and for the first time, Burundi is investing in Tanzania through the construction of a fertiliser plant in Dodoma that will produce 600,000 tonnes of fertiliser, thus significantly addressing the country’s shortage from the demand for 700,000 tonnes,” she said.
President Ndayishimiye arrived in Dodoma on October 22, where he was warmly received by his host, President Samia Suluhu Hassan.
He laid the foundation stone for the construction of the fertiliser factory; visited Kwala Area in the Coast Region, Zanzibar and the Dar es Salaam Port.