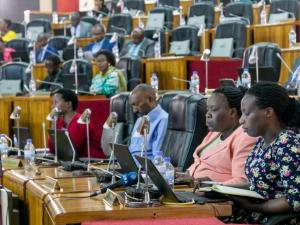 A new bill has set Rwf700 million as the value of assets for a private security company to be allowed to operate in Rwanda.

The relevance of this draft law governing private security services was presented to the plenary session of the Chamber of Deputies on Tuesday, February 25, 2020, by Patrick Nyamvumba, the Minister for Internal Security.

“There is still a critical issue of substandard professionalism in many licensed Private Security Service Providers (PSSPs) leading to poor quality service delivery.

And this is mainly caused by low investment capacity of the companies, recruitment of substandard personnel, immediate deployment of security guards without sufficient training, irregular salary payment for the security guards which stimulate them to commit some offences such as theft,” he said.

In order to solve such problems and ensure security, the Minister said that “the companies must present a document indicating the value of assets of the applicant equivalent to at least to Rwf700 million.”

He explained that previously the companies were injecting lower investment in private security companies.

General Nyamvumba said that the required assets include at least Rwf200 million in cash in a bank account to pay security guards regularly for at least six months for newly established Private Security Service Providers (PSSPs) while waiting for income from their contractors or clients.

“By considering enough investment, we want to avoid delays in paying security guards’ remunerations and if possible there can be a slight increase in the wages according to the companies’ capacity,” he said.

The official said that besides proving financial capacity, the time for training security guards will also be increased so as to improve their capacity and professionalism to improve security services they offer.

“After the basic training, the officers will get certificates to prove their capacity which they can even present to other security companies while applying for jobs without necessarily being trained again,” the minister said.

Other changes in the law provide that if the companies are applying for operating licenses, they must present notarized rules that govern the Security Company, criminal record document, and plan for their security services.

The new elements in the draft law also include allowing foreign security companies to open their services in Rwanda and also allow local companies to operate in foreign countries.

Those operating without a license from national police will be suspended, he noted.

There are 17 private security companies across the country.

MP Pie Nizeyimana asked the ministry to revisit the requirement of Rwf700 million assets saying it was too much for a company seeking to invest in security services.

Frank Habineza, who represents the Green Party in Parliament also requested the ministry to ensure that foreign security companies who want to invest in Rwanda operate under strict rules that put Rwanda’s security at the center of their services and not just being profit-oriented.

“The new law must take into account security guards’ welfare by looking at their meagre remunerations and delay in their payments since this affects security service delivery,” reiterated MP Gloriose Uwanyirigira.

Minister Nyamvumba replied that the required Rwf700 million assets value for the company will ensure that they invest enough in equipment, remunerations to the workers and other aspects.

He added that foreign companies will have to employ locals.

The relevance of the new draft law was approved members of parliament and will soon be taken to commission.