No one can defeat Magufuli, so no need for 2020 elections: Tanzania MP 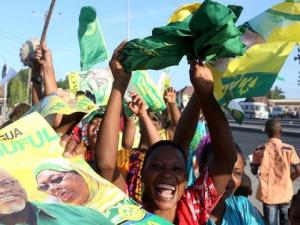 A lawmaker in Tanzania has proposed extending president John Magufuli’s stay in office, beyond 2020, when the latter’s current term of office expires.

Mtera MP, Livingstone Lusinde, who is also a member of the ruling Chama Cha Mapinduzi (CCM) party told his colleagues in parliament, that there is no reason the country should conduct a costly presidential election in 2020.

‘‘It is costly to hold presidential election, and as we all understand, no one can defeat president Magufuli,’‘ Lusinde said. Lusinde’s proposal would keep Magufuli in office until 2025, while maintaining civil and legislative elections next year.

‘‘The country should let president Magufuli proceed for another five years.’‘

Magufuli, who assumed the office of president in November 2015, has previously dismissed proposals by his party to extend his rule, advising all Tanzanians to instead focus on developing the country.

Ironically, Lusinde also argues that money saved from skipping next year’s presidential election, could be redirected towards development projects.