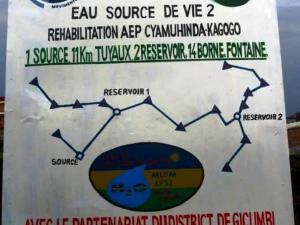 Thousands of homes in several sectors in Northern Rwanda have not had clean water for over 7years. To get water, locals have to walk for up to 5km and buy water at a cost similar to prices in capital Kigali.

PAAK KAM Company Ltd, a private firm contracted by government to manage a Rwf 250m water supply project in this area in Northern Province, instead destroyed it, and the pumping equipment is missing. Surprisingly, the same company has questionably won more contracts in different other regions of Rwanda including Kigali.

The area hit by the severe lack of water covers four sectors of Giti, Muko, Rutare and Rushashi – all located in Gicumbi district. The district has 21 sectors.

The lack of water in the four rural and mountainous sectors was solved between 1987-1992. An Italian NGO MLFM or Movimento Lotta Alla Fame Nel Mondo, translated as ‘movement to fight against hunger in the world’, constructed a water supply system there.

As part of the project, a series of aqueducts, canals, and pipes were linked to a pumping station that pushed water up the hills to reach communities. The completed project was handed to locals. However, as a result of the war which culminated into the 1994 genocide against the Tutsi, the water supply system was destroyed.

In 2007, the same Italian NGO MLFM returned in the area, this time with a much bigger development project. With a Rwf 500m financing from the European Union, the Italians partnered with AVSI Foundation, also an Italian charity. The project was to set up water systems and sanitation facilities in villages, schools, health centers and government offices.

The two NGOs immediately set out to rehabilitate the first water supply system constructed earlier. A total of Rwf 250m was spent on the task. Upon completion, the NGOs had concurrently also been training technicians known locally as ‘Bakanyamigezi‘.

These technicians formed a cooperative called COFO Gicumbi or Cooperative de Fontainiers de Gicumbi. The district signed a 5-year contract in February 2012 with this cooperative to manage the water supply in the currently affected regions.

However, barely a few months later, Gicumbi district mayor at the time Alexandre Mvuyekure cancelled the above contract. The project was mysteriously handed to PAAK KAM Company Ltd. It is from then that water problems started for the local population.

PAAK KAM is owned by Hadji Shumbusho Asuman, a renowned businessman from Kigali. First, the pipes were removed. The Nyankenke-Mutete aqueduct began falling apart due to no maintainance. The water pump covering the sectors of Rutare, Muko and Nyamiyaga – stopped working altogether.

Asked why they handed over such a big project to Gicumbi district administration, Fiordalisio Omar, the Italian NGO country director told The Chronicles: “At the end of the project we were obliged to make a handover to the district which will manage the aqueduct itself through a tender. In the years behind we also had management cooperative formed by a group of our workers who managed several aqueducts very well through the PPP Public Private Partnership system, then things changed with the management and contractors.”

Around 2016, employees of PAAK KAM company were arrested removing water pipes from sites. The suspects led Police and local officials to the home of the mother of Shumbusho, the company owner. There, a large collection of more pipes and other equipment were found, according to a security report which The Chronicles obtained.

However, the case never went any further. No one was prosecuted for the missing pipes and water pump yet the suspects are known. Local officials in Gicumbi are quick to defend themselves that most parts of the region have water, and its just a small area lacking.

When we put all these issues to businessman Shumbusho, he denied everything. He falsely told us that he removed the pipes so as to put new ones, yet no replacements were done.

As for the non-functional water pump located at Cyamuhinda, which cost the Italians 45,760 Euros (nearly Rwf 50m) to install, Shumbusho tells The Chronicles there is a small spare part missing, otherwise that the pump is operational.

“Keeping the old pipes at my mother’s home during rehabilitation works, is nothing out of the ordinary. Your sources are giving you false information,” he said, adding, “The water pump is fine. The problem is with the turbine.”

“People are telling you that some spares were sold. PAAK KAM is not that kind of company. An official investigation was conducted which found no wrongdoing on my part. That is why no further action was taken against me.”

Another strange thing happened. Mvuyekure, the former Gicumbi district mayor who fraudulently gave PAAK KAM company that water project management contract in 2012, is today working in the same company as its coordinator in western province, based in Nyamasheke district.

As the situation stands today, the same PAAK KAM company, despite destroying a water project in one region of Gicumbi, it has a contract managing water projects combining another set of sectors in the same district.

PAAK KAM is also managing government-funded water projects in Nyamasheke, Muhanga, Burera, Kayonza and Rusizi districts. Even in Gasabo district (Kigali), the same firm is present and has been in the media accused by locals of charging exorbitant rates for water.

For several years now, water extension projects in rural areas that are either donor, or government funded through the national water utility WASAC, are eventually handed to private companies for onward management. The companies ensure the facilities are kept in good condition by charging minute prices for water from the residents.

For the affected local population in rural Gicumbi, they have petitioned different government offices to no avail. Different residents we interviewed said current Governor Jean Marie Vianney Gatabazi has yet to visit the region, but that all his predecessors did come and left with no solution. The residents have been left to struggle on their own.

Munyampenda Théogene, a resident in Muko Sector, told us it takes his family an hour to reach the nearest water source. He, and thousands other families have lived in such condition for past seven years, with no end in sight.

“We have simply given up. A 20-litre jerrycan costs Rwf 200 from sellers who transport water, yet we used to buy the same jerrycan at Rwf 10 when we had our aqueduct and pump.”