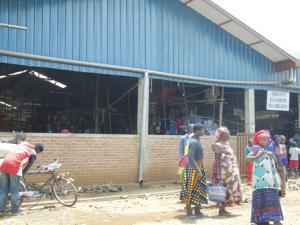 After the cassava flour traders in Rwesero market in Rwesero sector on Tuesday, April 14, 2020, told Isangano Radio journalist that they had been mistreated because they were fined alone, they said that it later affected them.

In this story the profiles of the three traders who mentioned their problem are not used for their security.

One said: “Gitifu”( Executive Secretary) himself came from Rwesero cell with two tax collectors, one who was wearing a service uniform and the other who was not dressed, who brought more than five [DASSO staff] and we saw them coming with the manpower.

“Let them wrap up the flour and show them where to go to put it, and we will see if they call the journalists again”. Said the ES

Another said, "After you left, when the lady gave you the information, they did something so bad, so bad that we were going to sleep outside our homes.... but before they took  our goods , Gitifu said," Take it and  let them go to call the reporters. "

After merchants called the journalist again, the ES told the DASSO to open the cell store and give them their good. Unfortunately some of them didn’t find their goods inside.

"I couldn’t find my 30kgs bag of flour, I asked the guys [DASSO] and they replied that it doesn't matter to them."

This is not the first time in Rwesero cell that residents have expressed concern that if they tell the media what is going on will affect them, in 2019 a man has been placed in a correctional center  after revealing to the media the problem he had, and was later released