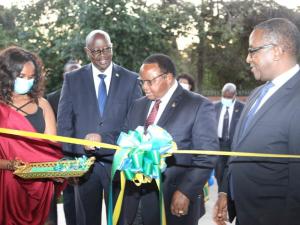 Rwanda has officially opened her Embassy in Zimbabwe. The ceremony to inaugurate the mission was held on July 31, in Harare, the capital city. Rwanda’s Minister of Foreign Affairs and Cooperation, Dr. Vincent Biruta, and Zimbabwe’s Minister of Foreign Affairs and International Trade, Amb. Frederick Shava were the guests of honour at the colourful event.

Speaking at the ceremony, Dr. Biruta said Zimbabwe and Rwanda share a lot in common, including a history of fighting injustice and inequality, adding that the official opening of the mission is part of the vision of the leaders of the two countries, President Paul Kagame and President Emmerson Mnangagwa, to revitalise bilateral relations between the two countries.
“It therefore comes as no surprise that we share a determination to stand up not only for ourselves but for our African brothers and sisters as we strive to attain the prosperity and dignity that our people rightly deserve,” Dr. Biruta said.
“As much as we have come a long way, our work is not yet done. Working together as Africans we must remain steadfast in promoting and building good politics based on solidarity and stability. The solutions to our biggest challenges are right here in Africa,” he added.

Dr Biruta said that relations between the two countries have been deepened over the past couple of years under the stewardship of the two Heads of States and more is yet to come.
“I wish to reiterate the commitment of the Government of Rwanda to reinforce our friendly relations for a common purpose and mutual benefit,” he said.

On his part, Amb. Shava reiterated the need to take advantage of the flourishing ties between the two countries and explore the available opportunities, including trade, for the benefit of the citizens of both nations.
“Allow me to note that bilateral relations between our two countries remain very low. The framework of the Zimbabwe-Rwanda Trade and Investment Conference which we have started implementing should therefore spur us to greater heights in this field of economic endeavour. I am confident that coupled with opportunities presented by the African Continental Free Trade Area, our economic and trade relations will be greatly improved ,” said Shava.
Shava said the bilateral relations have seen the establishment of an inaugural Joint Permanent Commission on Co-operation which is a strategic framework for coordinating bilateral relations.

On Friday, Rwanda and Zimbabwe signed pacts on the Extradition Treaty, Immigration Cooperation, and another memorandum on Cooperation when investigating civil aircraft accidents and serious incidents.
Allan Majuru, the ZimTrade Chief Executive Officer said that Zimbabwe is ready to use Rwanda as the gate to other markets.
“We have many opportunities; our countries are both enclaved but we can use territorial ways. We want to use Rwanda to join East Africa. Recently we were in Kinshasa, Burundi, and the Central Africa Republic,” Majuru said.

Different enterprises showed the intent to invest in Rwanda. For instance, the Zimbabwean enterprise of house furniture known as Teecherz Home & Office has already started operating in Rwanda.
Among other companies that are to start working in Rwanda are; Maka, which is in the irrigation sector, ZimNyama which is in animal production, and W2 Industries. Rwanda wants to strengthen bilateral and economic cooperation with Zimbabwe to boost trade and investment between the two countries.

The journey started back in 2018 when the President Paul Kagame appointed James Musoni as Rwandan Ambassador to Zimbabwe. It is the first time for Rwanda to have an Embassy in the Southern African country, which was previously served by Rwanda’s mission in South Africa.

Previously, President Kagame attended the swearing-in of the President Mnangagwa who was replacing Robert Mugabe, who was the president for three decades. The national carrier, RwandAir began operating flights to Harare, Zimbabwe via Lusaka, Zambia.
While receiving credentials from the Rwandan Ambassador; President Mnangagwa said that the two countries were looking to strengthen the existing cordial bilateral relations for the mutual benefit of the two countries.

In 2019, President Mnangagwa, while in Rwanda, visited Rwanda Development Board (RDB) and appreciated how Rwanda helps investors. In September last year, both countries signed five cooperation agreements. The agreements were in the areas of ICT and e-governance, environment and climate change, agriculture and livestock, tourism, and business events.

The agreements were signed between Rwanda’s Private Sector Federation and the Confederation of Zimbabwe Industries. This year, the Rwanda delegation also participated in the Rwanda-Zimbabwe Trade Conference held in Zimbabwe.
President Mnangagwa in his opening remarks said that the cordial, fraternal relations between the two countries should continue to spur the growth of the business across various sectors of the respective economies.

The total of agreements between Rwanda and Zimbabwe is 22. And, Rwanda is set to receive close to 477 Zimbabwean teachers by September this year, which will include English and science, technology, engineering, and mathematics (STEM) teachers.
https://www.ktpress.rw/2022/08/photos-rwanda-zimbabwe-vow-to-strengthen-...