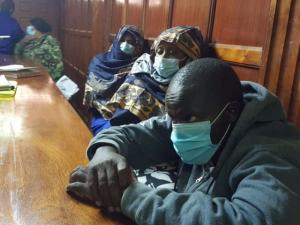 Authorities want the CEO of Mama Lucy Kibaki Hospital Dr Emma Mutio and two others detained so that police can complete investigations into the theft of babies scandal at the health facility.

In an application filed at a Milimani court, the Directorate of Criminal Investigations (DCI) says the baby stealing syndicate exposed by the BBC recently involves many players not only the health workers.

Ms Mutio is in police custody together with the hospital’s administrator Dr Regina Musembi and social worker Makallah Fred Leparan.

Chief Inspector Wanga Masake from the Kilimani police station on Wednesday told a magistrate court that the DCI received information that the three suspects were engaging in child trafficking contrary to the law.

While appearing before Senior Principal Magistrate Bernard Ochoi, the officer said the arrest of Dr Mutio and Dr Musembi happened following information obtained from Mr Leparan as to their involvement in the crime.

Mr Masake said in the BBC exposé clip the hospital was mentioned where there is on sale of babies at a varying cost of between Sh100,000 and Sh300,000.

The court heard that the clip showed Mr Leparan negotiating with undercover journalist in a well-planned plot to sell a child who had been abandoned at the Mama Lucy Kibaki Hospital.

From the same source, the court heard, Mr Leparan is seen receiving a substantial sum of money after handing over three abandoned children to the journalist. The children were later found at Imani Rehabilitation Agency.

“We have reasons to believe this is a well organized criminal gang that is operating within the country whose other players are yet to be established,” said Mr Masake. He wants court to allow the detectives hold the suspects for ten days, insisting that the application for detention is in good faith.

The two doctors are believed to have aided Mr Leparan in the commission of the said crime, the court heard from the detective who added that the infants at the centre of the trade were aged between one day and six months.

The inspector said owing to complexity of the investigations there is need for police to continue holding the suspects before preferring the charges.

He expressed fear that the suspects are likely to interfere with the investigations as well as recovery of the stolen babies.

He also told the court that the two doctors are persons of influence at the hospital and if released are likely to interfere with the facility’s records.

“We have only recovered two children. We have not seen them but we have the files at Imani Children’s Home. We met Embakasi children officer and she has recorded statement on the matter. We are yet to establish the mothers of the children,” said the officer.

The court further heard that the recovered children need to undergo a DNA procedure and that BBC needs to authenticate the video clips.

However, the suspects opposed the application saying the DCI moved swiftly because the expose’ was done by a foreign media and not a local one.

Through a team of three lawyers led by Danstan Omari, the suspects said in their arrest the DCI was serving foreign interests coined as public interest.

They also gave court details of their places of residence as they downplayed investigator’s claim that their fixed place of abode is not known.

“There is no demonstration on who are the witnesses they will interfere with,” said Mr Omari.

He also questioned the purpose of arresting Ms Mutio, given that she has been the head of the facility for only ten days following her transfer from Bagathi hospital. The alleged offences were committed sometime in March when she was not working at the facility.

“She reported to the hospital ten days ago after the transfer and has not even taken over full control of the hospital. The court should enlarge the bill of rights and interpret the constitution to the benefit of the suspects not benefit of the State,” said Mr Omari. The court will rule on the application tomorrow morning.