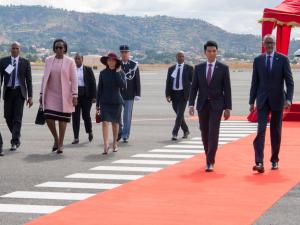 President Paul Kagame and First Lady Jeannette Kagame have arrived in Antananarivo for 59th Anniversary of the Independence of the Republic of Madagascar.

Kagame will be the guest of honour at the independence celebrations due Wednesday afternoon at the Mahamasina Municipal Stadium in Antananarivo, according to a statement.

Later in the evening, President Kagame and his host, President Andry Rajoelina, are set to hold bilateral talks and address a joint news conference.

The President and First Lady are also expected to attend a State Banquet hosted in their honour at Iavoloha Presidential Palace.

Rwanda and Madagascar maintain bilateral ties in different areas and the two countries have recently expressed willingness to strengthen their cooperation in such areas as mining, tourism, agriculture and legal affairs.