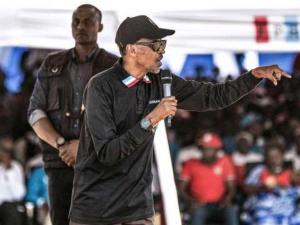 Rwanda’s ruling party Rwandan Patriotic Front (RPF) is walking a tightrope trying to deliver on its promise to lift more citizens out of poverty ahead of the 2024 presidential election.

While before the Covid-19 pandemic struck, the party was largely on track to deliver on that promise — with a high growth rate of at least seven percent — now it finds itself resuscitating an economy reeling from the pandemic and new headwinds related to external pressures such as rising fuel prices and other effects of the Russian invasion of Ukraine.

The Covid pandemic reversed the gains made in poverty reduction, according to the World Bank.

President Paul Kagame, who is also the RPF chairman, told cadres during a recent party extraordinary meeting held at its headquarters, the Kigali Arena, that they must expedite growth and cautioned them against complacency and indiscipline.

“As RPF, we only have two years to deliver to Rwandans what we promised them during the current tenure, therefore, we must evaluate the current (seven-year) term: Where we are now and where we might be by its end; we review what we achieved, what we failed to deliver, the reasons why and add effort where it is clear we did little,” the President Kagame said.

Since his re-election in 2017, President Kagame has reshuffled his Cabinet several times, replacing long-serving ministers with young ones below the age of 45. At the meeting, Uzziel Ndagijimana, who was appointed Minister for Finance and Economic Planning on April 7, 2018, said the economy is on a rebound, with growth registered across different sectors.

“We are emerging from the pandemic but not in a bad place economically,” he said, referring to the multimillion-dollar Covid recovery fund that was made available to the businesses in the sectors hard hit by the pandemic.

Economic growth in 2022 is projected at 7.5 percent, after a 3.4 percent contraction in 2020. But it is not yet out of the woods. Unemployment, especially among the youth, remains high. The latest figures by the National Institute of Statistics shows that in November 2021, the unemployment rate had increased to 23.8 percent compared with 19.4 percent in August 2021.

The unemployment rate was relatively higher among youth aged 16 years to 30 years, at 29.8 percent compared with 19.3 percent among adults aged 31 years and above.

Frank Habineza of the Democratic Green Party of Rwanda, who challenged President Kagame in the 2017 presidential election, getting a paltry 0.72 percent of the vote, says he still has presidential ambitions, though his party is yet to decide who will be on the ballot in 2024.

The Green Party, which has about 350,000 members, says it is setting up party structures for the youth and women across the country in preparation for parliamentary elections next year.

“We are still doing a manifesto review. The party will field a candidate,” Mr Habineza told The EastAfrican.

The Green Party says its main goal is to bring about "genuine and authentic" political opposition in the country.

In Rwandan parliamentary elections, votes are cast for a party instead of individual MPs. The party then, depending on the percentage vote it receives – with five percent being the minimum allowed for representation — picks candidates who become MPs.

In its seven-year manifesto, RPF pledged to fast-track economic development, improve social welfare, and put in place good governance and justice systems. In 2017, shortly after securing a seven-year third term with 98.7 percent of the votes cast, President Kagame pledged to “continue transforming Rwanda and ensuring a dignified life for every citizen.” This was after a national referendum that paved the way for the amendment of the country’s constitution, granting him a third term. The amended constitution also extended the presidential term to seven years from five.