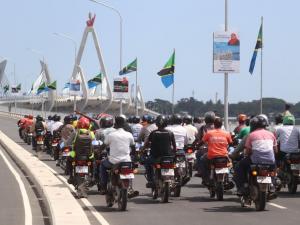 Dar es Salaam. President Samia Suluhu Hassan has on March 24, instructed the Minister of Works and Transport Professor Makame Mbarawa to change the torch symbol on the new Tanzanite Bridge and replace it with the gemstone that matches the name of the bridge.
The President was speaking today, March 24, 2022 at the inauguration of the Sh243 billion bridge which started operations on February 1.
President Samia said she received the advice from the people that they would like the torch be replaced with Tanzanite sign to match the reality of the project’s name.
"Let me say something Honarable, Minister about the advice I have received from people, we call this bridge Tanzanite but the mark we have is that of the torch. In addition the torch is a major symbol to our nation and it is of great value, the people would love to see the tanzanite mark where the torch is to match the name of this bridge," said President Samia.
The Tanzanite Bridge was built by South Korea's GS engineering along the Coco Beach coastline in Oysterbay stretching all the way to Aga Khan Hospital covering 1.03 kilometers.
The project broke grounds in 2018. The new bridge is jointly funded by the Tanzania government and the government of South Korea at 82.9 per cent of the entire cost. It connects roads linking Aga Khan Hospital and Coco Beach and it measures approximately 6.23 kilometers at a cost of Sh256 billion.
With a 180-tonnage Capacity, the bridge is expected to ferry 55,000 vehicles or thereabouts per day, and this is expected to significantly reduce congestion along the overwhelmed independence-time Selander Bridge.
The old Selander Bridge was constructed back in 1929 and named after John Einar Selander, Tanganyika’s first Director of Public Works.