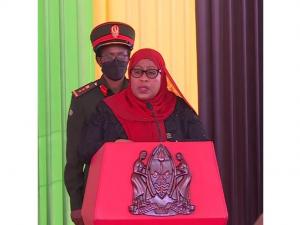 President Samia Suluhu Hassan has spoken out on her decision to appoint Dr Stergomena Lawrence Tax as the first female minister of Defence and National Service, saying it was to break the taboo that the position is only suitable for men.

The President was speaking at the swearing in of Dr Tax and other two newly appointed ministers and the Attorney General at Chamwino State House, Dodoma.
President Samia said, “The minister’s job at that office is not to carry guns or artillery, her main duty is to mainly coordination and manage administration and policies at the ministry.”

“That was not the only reason, but also her vast experience from her previous position at the Southern African Development Community (Sadc), so she is aware of the security issues in the region,” the President said.

President also said that Dr Tax well informed of Tanzania security forces engagements in Mozambique and Congo; their systems and all details about their operations.
Dr Tax who is a former Executive Secretary Sadc replaces the late minister Elias Kwandikwa who passed away on August 2, this year while undergoing treatment in Dar es Salaam