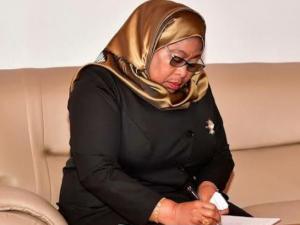 Today Tanzania marks 30 years since we officially returned to the politics of the multi-party system.

During that period, our Nation has gone through a period of joys, sorrows, tribulations and challenges as it begins a new path.This is not easy because those times were not easy across the world.

The period when Tanzania returned to the system were difficult years. In the early 1990s witnessed such challenges as the collapse of the former Soviet Union, civil war in Africa, genocide and many political and economic conflicts in developing countries like ours.
But Tanzanians went through that time united and we have continued with that culture 30 years later.

I would like to take this opportunity to congratulate all and it is my sincere hope that the leaders who will come 50 to 100 years later, will continue to lead a country united with non-discriminatory citizens and fight even if they disagree on how to run their country.

It is good to talk about how we got into this system. President Ali Hassan Mwinyi set up a Justice Francis Nyalali Commission that came up with the response that only 20 percent of Tanzanians wanted a multi-party system.
It was the wisdom of Mzee Mwinyi and his fellow leaders of the time who decided to listen to the minority. If our elders were to wait until 80 percent demanded for multi-party politics before we can accept the changes, perhaps today we would not be where we are.

This is one of the biggest lessons for politicians of my generation and future generations. In the matter of national interest, knowledge and prudence are more important than numbers.
From having one political party – Chama Cha Mapinduzi (CCM), we now have about 20 registered parties.
Instead of listening to one voice and sometimes saying "Long live the Chairman's Thoughts", now Tanzanians hear voices about different ideas.

Fortunately, even Chairman Mao (of China) once said "Let 100 flowers blossom together".
I would like to take this opportunity to congratulate all those who made this journey a success. CCM and Government leaders who saw the need to allow multi-party system before wars and violence could forced us, activists and intellectuals who helped to show us that we need to enter the multi-party system.

However, it would be a big mistake to think that the work has been completed. I believe that we are now going through the same difficult environment that existed when we embraced multi-party system.

There are wars in various parts of the world, including the developed countries, a liberal democratic system is going through a crisis and big powers are fighting for world domination. It is a challenge that our generation leaders need to overcome as my predecessors did.
That is why in my leadership I believe in what is known as 4R – Reconciliation, Resilience, Reforms and Rebuilding.

In the famous 19th-century drama of Lolanthe, authors Gilbert and Sullivan state one thing about the American nation at the time, "everyone born is either a conservative or a liberal child". I do not believe in such positions.
That human beings, be they politicians, leaders or ordinary citizens, have a consistent position on matters of national interest. A particular position or situation may be understood or accepted at some point but not always. It is not always time to congratulate one another and not always a time to fight.

In building a better Tanzania I aspire to build a society of reconciliation and harmony. I wish to build unity regardless of our political, religious, ethnic and all other differences.
This will only be possible by building a society that enjoys equal rights before the law, without discrimination and that provides equal economic opportunities for all. I believe reconciliation cannot be achieved through discrimination and where there are those who are deprived of their economic and civil rights and rights.

As our Father of the Nation, Mwalimu Julius Nyerere, once said nation building is not an easy thing. Tanzania cannot move forward if we, the people and your leaders, are complacent in defending our interests.
There is an adage that says ‘unity is strength’ and the only way to overcome all the challenges facing the world right now is for us to do so in unity and solidarity.
In the journey that lies ahead we shall be shaken. Be it economic, environmental, social and political but we must build resilience. This is because we have no other country other than Tanzania and this is our home. I was very encouraged by the way Tanzanians received the Royal Tour event with exceptional patriotism.

There is a popular saying that the only thing that man sure of is change. I am determined that in commemorating our years of multi-party democracy, my Government will strive to make changes in our political, economic and electoral systems.
The goal is for Tanzania to move with the times and - as always, let us know in advance when it is time to do something even if people do not support it or do not support it at the right time.
Changes in our electoral laws will create fair competition and give people the opportunity to choose who they want to elect as their leaders. On the economic front, change will aim to provide more opportunities for more people to benefit economically instead of just a few.

I understand that citizens neither eat Reconciliation, Resilience nor Reforms. At the end of the day - as some of my predecessors did in this century; Benjamin Mkapa, Jakaya Mrisho Kikwete and John Magufuli, the main goal should be to grow our economy. An economy that will increase employment for our youth and that will open up opportunities for all social groups in the country.

We are already developing major infrastructure projects and others in the mining and energy sector. Efforts made through the Royal Tour campaign are aimed at revive the vital tourism industry that has been hit hard by Covid-19. In agriculture we are going to make some big changes so that this critical sector can start making a decent contribution to our economy.

I believe that with our efforts of four R, we will be able to achieve the goals of having a multi-party system.
The main goal was not to have many political parties but to build a society that is patriotic, harmonious, resilient and with a growing and sustainable economy. This is the best way to keep the dreams of those who fought for multiple parties alive.

Kazi na Iendelee...............
Samia Suluhu Hassan is the President of the United Republic of Tanzania and Chairperson of the Ruling Party Chama Cha Mapinduzi
https://www.thecitizen.co.tz/tanzania/oped/president-samia-s-letter-to-t...