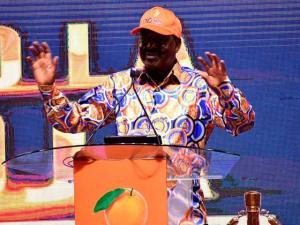 The Orange Democratic Movement (ODM) party is the richest party in Kenya with a net worth of Sh10 billion according to its latest disclosures.

The Raila Odinga-led party’s value has increased by 12.4 percent from Sh8.9 billion last year, with 96 percent of its value being monies owed by the Political Parties Fund, according to its statement.
The Orange party says it is now owed Sh9.62 billion by the exchequer in the fund, an increase from Sh8.55 billion last year.

Pomp, colour and excitement at ODM NDC
The fund is allocated 0.3 per cent of the national government revenue each year to be disbursed to qualified parties.

Former President Uhuru Kenyatta’s Jubilee Party is the second richest party in the country and is valued at Sh429.44 million, according to its latest audited financial accounts for the financial year to June 2020.

This as ODM’s net earnings increased by Sh9.32 million in the financial year to June this year even as the party moved to pay millions to its former partners in the National Super Alliance (NASA) following its exit from the coalition last year.
ODM generated a net income of Sh1.1 billion during the period up from Sh1.09 billion it earned in the year to June 2021 even as the party enjoyed a boom in public contributions and donations ahead of the August polls.

This as its spending on campaigns increased six-fold as the party sought to capture more seats ahead of the hotly contested elections.
The party, which is one of the 26 parties registered by the Office of the Registrar of Political Parties (ORPP) under the Azimio la Umoja One Kenya Coalition Party, spent Sh688.76 million on campaigns in the 12 months to June, up from Sh114.19 million it spent in the previous year.

ODM leader Raila Odinga was Azimio’s flagbearer in the tightly contested presidential poll in which President William Ruto emerged victorious.
The party’s earnings from public contributions and donations also grew six-fold to Sh322 million up from Sh51.5 million, while receipts from the government went up to Sh294.9 million up from Sh240.5 million last year.
It also earned Sh1.54 billion in arrears from the government during the same period up from Sh1.11 billion.

Mudavadi could not fund his presidential campaign
ODM also transferred Sh47.48 million to its former partners in NASA including Amani National Congress (ANC), Ford Kenya and Wiper Democratic Movement Kenya (WDM-K).
ODM had not disbursed any money to its former partners in NASA in the financial year to June 2021. The party has bank balances amounting to Sh156.7 million.

The party last year announced its exit from NASA after two of its partners made similar moves effectively marking an end to a four-year tumultuous marriage in the coalition that was formed ahead of the August 2017 polls.