Rains continue to leave trail of destruction in Kenya 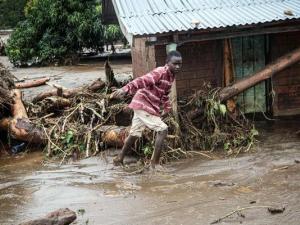 Hundreds of families have been left homeless and several have been killed after heavy rains caused destruction in various parts of Kenya. A man drowned as he tried to cross the flooded Kipkaren River in Nandi County, in Kenya's Rift Valley, while several families were left homeless as rains pounded the area.

Speaking to the media on Monday, irate residents attributed the destruction to the poor construction of the dam, which is meant to boost agricultural production in the area.

Mr Morris Kinoti said the dam now poses additional danger to children after its fence was brought down by floods.

People stand on debris blocking a highway on a bridge after River Muruny burst its bank in West Pokot county, western Kenya, on November 24, 2019. PHOTO | AFP

Meanwhile, residents of Ngando village in Kirinyaga County, central Kenya, lost dozens of acres of crops to the floods. “We are calling on the government to give us relief food,” said Mr David Kiberenge, whose six-acre maize farm was ruined.

“Our crops, homesteads and key roads connecting this village are flooded with water and we have been left hapless. The government should intervene and help us,” Mr Muthami said.

In the North Rift, floods hampered the distribution of relief food in some areas.

Several roads have been cut off by mudslides in Tindiret sub-county in Nandi County.

The rains have rendered most roads in the Kerio Valley impassable, making it impossible for farmers to access markets.

“Our crops are likely to rot on the farm as we cannot access markets due to pathetic state of the roads,” said Rachael Chematia from Chesongoch, Elgeyo-Marakwet.

In western Kenya, at least 450 households have been displaced. In Homa Bay County, 20 families' houses were destroyed, while 250 people were affected in Siaya County. In Kisumu County the number of households displaced in Nyando constituency has risen to 180. Families are camping at Nyamasao Primary School.

"We need a medical camp and drugs plus for food aid to be given to the affected households so that our people do not suffer from life threatening water borne diseases in flood hit areas," said the chief.