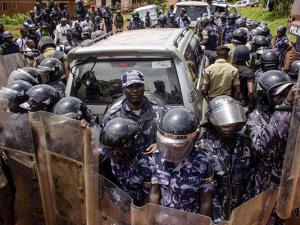 A divided opposition is facing routine harassment from state agencies.

Ever since the new face of opposition, 36-year-old musician-cum-legislator Robert Kyagulanyi aka Bobi Wine, announced his intention to challenge the president in 2021, the regime has pulled all stops to win over the youth who are seen as his base.

Political parties are now working to win the hearts and minds of an increasingly polarised populace in preparation for 2021, although key opposition figures have been blocked.

Forum for Democratic Change (FDC), Uganda’s leading opposition party, has faced the wrath of security agencies in the past few months, with four of their rallies being blocked and four upcountry radio stations switched off because Dr Kizza Besigye, the party’s former flag bearer and four-time president Museveni challenger, was set to be hosted on talk shows.

Bobi Wine—whose music concerts are laced with political undertones—had his Easter weekend shows around the country banned; the legislator was arrested on Easter Monday at his One Love beach where the concert was to take place, and driven to his home.

This brings to 123 the number of planned concerts by Bobi Wine that security has blocked since 2017.

The police claim the opposition politicians did not fulfil requirements of the Public Order Management Act (POMA) to hold meetings, rallies and the concerts.

But the opposition has constantly said the POMA is aimed at stifling freedom of assembly and expression, and they are pushing for a review, leader of opposition in parliament Betty Aol Ocan said.

“The opposition in Uganda can only make sense of their agenda when they behave contrary to the law and they provoke security to win sympathy votes and popularise themselves,” Mr Mulindwa said.

The police force also denies that it is conducting political witch-hunt of the opposition, with its spokesperson Fred Enanga saying the activities are being blocked because they failed to fulfil most of the requirements needed by the Public Order Management Act at particular rallies and meetings.

“FDC has been holding public meetings and they have not been blocked but because they have been running their defiance campaign, they have resorted to ignoring the law most of the times,” Mr Enanga said.