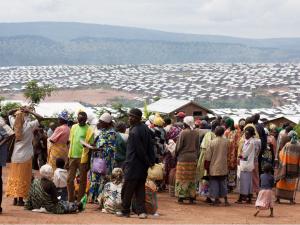 The first batch of Burundian refugees in Rwanda is expected to head home on August 27 following an agreement between Rwanda, Burundi and the United Nations High Commission for Refugees (UNHCR) to facilitate the process of repatriation.

The understanding was arrived at last week after Rwanda made it clear that it was not against the repatriation of Burundian refugees who have been in Rwanda since 2015, after the Burundi’s President Maj. Gen Evariste Ndayishimiye claimed that the refugees were ‘being held hostage’ by a neighbouring country.

Under the agreement, UNHCR will facilitate the process following the Government of Burundi saying that it would be ready to welcome back the refugees, however, KT Press understand that not all the 60, 000 or so refugees in Mahama Camp are looking forward to return home.

One of the refugees who spoke to this publication said that they feel the process has been hurried and has not addressed some of the challenges they might face when they return home.

“Some of my relatives are still in jail. I could also be jailed when I return home. Issues of amnesty have not been addressed. What if we are arrested upon return?” one of the refugees, who spoke to KT Press on condition of anonymity said.

He explained that some people fled after being accused of fomenting protests against President Pierre Nkurunziza third term, surviving arrest by a thin like. He said these individuals might not be ready to return before they are given assurances.

“The President’s speech revealed that security forces would be interested in some individuals,” he said, adding however that majority of those could be urban refugees, who are mainly in Kigali and other secondary cities. That group has not expressed desire to return home.

According to Elise Villechalane, the UNHCR spokesperson for Rwanda, the first batch will depart in just over a week. A hotline was set up for refugees to voluntarily call and express the desire to return home and they are added on the list.

“We have put in place a hotline that Refugee can call and express their wish to return and they can also approach directly UNHCR staff who are everyday in the field,”

“Only those who voluntarily and individual express their wish to return will be considered for voluntary repatriation,” Villechalane told KT Press.

According to the UNHCR Spokesperson, once they express their wish to return, the refugee agency follows-up on the situation of the individual or family, identify where they would like to go back to, whether it is their area of origin or where they want to settle in order to have a clear understanding of each person’s needs.

“We also if there are specific vulnerabilities, whether they will require special care during the transportation process or for their integration in their country back home,”

“Once we have the list of people who would like to return, then we will organize together with UNHCR, Burundi and the Rwandan government and their transport and once in Burundi, they will be welcomed,” Villechalane added.

In Burundi, the refugees will go through the transit centre for registration and get also their integration package, which will include a lumpsum for their transportation to their area of return while UNHCR will continue monitoring other resettlement processes.

Following the meeting in Kigali, the Burundian officials said the government needed to prepare locations where the refugees will be received.

Relations between Rwanda and Burundi have played into the fate of refugees, Rwanda however maintaining that it is open to any process that would ensure voluntary repatriation of refugees.

On July 26, 2020, 331 refugees from the Mahama Camp allegedly wrote to President Ndayishimiye, asking for his voluntary return because the reason for their escape was no longer available.

After the letter went abroad, the Rwandan government expressed its readiness to help refugees who want to be helped to return home. The letter has since been shrouded in controversy after it emerged that some Burundian officials were behind it, to accuse Rwanda of holding the refugees hostage.

Last week, the Minister of Foreign Affairs Dr Vincent Biruta said that accusations levelled against Rwanda were false but Bujumbura instead blocked the return of Burundian citizens who were caught in Rwanda by COVID-19 restrictions, who wanted to be helped to return home.

Dr. Biruta said that Burundi refused to welcome the citizens back yet Rwanda did everything to facilitate their return at the time when borders were closed.

Rwanda is currently the third country with the largest number of Burundian refugees – about 72,000 – behind Tanzania and DR Congo. Many of these fled the 2015 political turmoil that gripped the country after the late President Nkurunziza decided to extend his mandate.