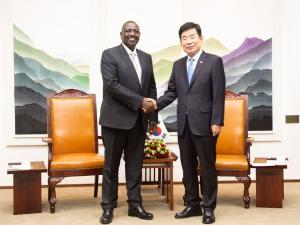 President Ruto touched down in Seoul, South Korea on Tuesday afternoon, indicating his trip will focus on boosting trade relations as well as investment opportunities in energy.

“Kenya is keen on expanding economic ties with the East Asian nation and exploring areas of cooperation, especially in ICT, education, pharmaceutical and infrastructure,” said a dispatch from State House, Nairobi on Tuesday.

Ruto is scheduled to attend a business forum to market Kenya “as a suitable investment destination for foreign investors. The visit is also expected to open up job opportunities for tech-savvy youth in both countries,” the dispatch added.

Ruto’s trip means it is the first official visit to South Korea by a Kenyan head of state since 1990 when former president Daniel Moi travelled there on a state visit. Museveni has become the first Ugandan head of state to make an official trip to Vietnam.

Ruto met with Kenyans in South Korea and was scheduled to meet with his host on Wednesday afternoon. Earlier on Wednesday, he told Korean Speaker of parliament that local legislators need to enact laws to “fix the trade imbalance” with Kenya.

“The imbalance of trade favours Korea and parliament can be instrumental in addressing this situation,” President Ruto said at the parliament building in Seoul when he held talks with speaker Kim Jin-pyo.

President Ruto said Kenya will work closely with the Korean government to enhance clean energy to mitigate the effects of climate change, according to a dispatch from State House.

Kenya, he said, is targeting to increase tea, avocado and coffee exports to South Korea to match technology imports to Kenya from the Asian country.

“We must move from processing five percent of our tea to 50 percent in the next five years and in 10 years’ time we should be able to process every gram of tea grown in Kenya,” Ruto told a group of Kenyans living in South Korea earlier on Tuesday.

A tentative programme released to the media indicated the Ugandan leader will also tour the FPT, Vietnam’s ICT firm, the Vietnam Academy of Agricultural Sciences and speak at the Vietnam-Uganda business forum.

“The visit, the first by a head of state between Vietnam and Uganda, will be an important milestone in the bilateral ties. It takes place in the context of the two countries looking towards the 50th anniversary of their diplomatic ties. it is expected to open up cooperation opportunities between the two countries in the time ahead,” a dispatch from the Vietnamese Ministry of Foreign Affairs said.