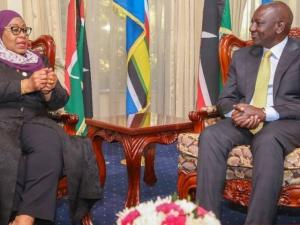 The expected state visit of Kenya’s President William Ruto on October 9 is a positive gesture by the new head of state as the two biggest economies in the East African region look to hush out any tensions and solidify relations.

Tanzania and Kenya have always maintained positive ties in politics and trade. However, often times there arise some issues, specifically trade spats that tend to threaten the cordial relations that have existed for years, destabilizing the unity in the East African Community which is aiming to consolidate the common market agenda and economic integration.

It therefore comes as good news that President Ruto has chosen Tanzania the first country to visit following his swearing in. His visit is an opportune time for the two countries to sit down and discuss a prosperous way forward.

Tanzania’s President Samia Suluhu Hassan has been at the forefront of pushing diplomacy and has maintained her regime’s intention to rebuild broken relations and forge new allies globally. As such, Ruto’s visit is yet again another opportunity for President Hassan to penetrate her vision of state friendliness and building rapport with neighbours.

It is true that there are many issues up for discussion between Tanzania and Kenya. Recently we saw cases alluding to unfair treatment at the border posts of the two nations in relation to export and import of maize. This has been a recurrent issue where traders from each country complain of unfair treatment or denied entry at the border on grounds of regulatory requirement.

When President Hassan made her first state visit to Kenya in May, 2021 and met with Ruto’s predecessor, Uhuru Kenyatta, the two leaders discussed key issues pertinent to the Tanzania-Kenya ties.

Some of the major areas addressed included resolving trade hurdles such as non-tariff barriers that had continued to hamper smooth running of businesses. Also on the agenda was the issue of border operations during Covid.

Following the visit and meeting between the two leaders, Tanzania and Kenya softened border control, non-tariff barriers were addressed and solutions to bilateral trade helped to boost business performance. With this, Tanzania’s exports to Kenya doubled within a period of 10 months, which led to the former having the upper hand on trade balance by exporting more than it is importing.

The government’s strategy to resolve obstacles worked and with it came positive results. Now, with a new regime in charge in Kenya, the two leaders need to sit down and see which areas need to be reassessed, and which new leads need to take shape.

President Ruto is well aware of the significant role Tanzania plays in inter-regional affairs, and will thus look for a way to cooperate with President Hassan’s government and the governments of the wider East African Community as the bloc seeks to maintain the strides attained in recent years which have made it one of the most organized and prosperous regional blocs in Africa.

Matters to be addressed during President Ruto’s visit will determine how Tanzania and Kenya work together in the coming months and years.
https://www.thecitizen.co.tz/tanzania/oped/ruto-s-visit-to-solidify-tanz...