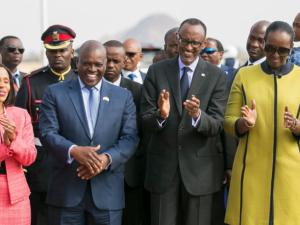 On arrival in Gaborone, the President and the First Lady were received by President Dr. Mokgweetsi Eric Keabetswe Masisi and First Lady Neo Masisi.

Later in the day, President Mokgweetsi Masisi and President Kagame held a bilateral meeting with members of their delegation before the signing of bilateral agreements.

President Kagame and First Lady arrived in Botswana after a two day visit to Madagascar where they attended the 59th Independence Anniversary on Wednesday.

During the visit, the two leaders held bilateral talks before witnessing the signing of a general framework agreement covering the areas of trade, investment, health, tourism, mining, peace and security among others.

The President and the First Lady attended a dinner hosted in their honor.

Speaking at the dinner, President Kagame said that the two countries share aspiration of improving the wellbeing and ensuring prosperity of their citizens.

“Rwanda and Botswana share the aspiration for the wellbeing and prosperity of our peoples, and we are pleased to be here, to strengthen our friendship and bilateral cooperation,” he said.

“Our officials have been working together to strengthen our partnership in priority areas that will contribute to transforming the lives of the people of the two nations,” Kagame said, adding; “I have no doubt that we shall succeed in this important task. This is because we are both committed to delivery, transparency, accountability and involvement of our people in their own development.”

President Kagame: Rwanda and Botswana share the aspiration for the wellbeing and prosperity of our peoples, and we are pleased to be here, to strengthen our friendship and bilateral cooperation

The President said that with both nations being members of the African Union, they will work closely to integrate and advance the continent.

“Rwanda and Botswana are both committed members of the African Union, and we continue to work together, as well as with other member states, to integrate and advance Africa,” he said.

The President also toured the FeedMaster Botswana Facility, a cattle feedlot in the outskirts of Gaborone where he was shown best practices in upgrading the condition of cattle before it is processed into beef exports.