The number of confirmed Coronavirus cases in the country grew by 17 on Monday to a total of 36, the latest statement by the Ministry of Health indicates.

Another one case is a contact of a previously confirmed case who was traced. 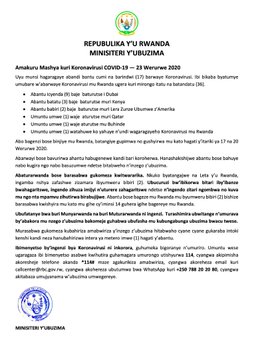 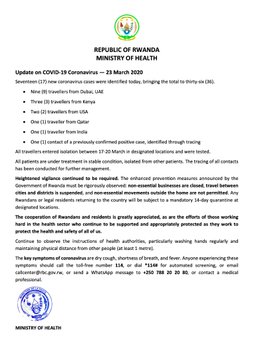 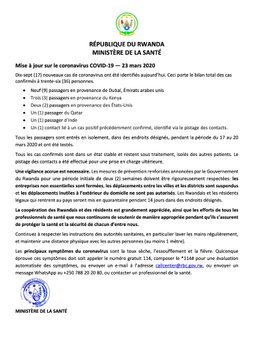 746 people are talking about this

All the travelers entered isolation between 17th and 20th March and were tested, according to the ministry.

According to the statement, all patients including previously confirmed cases are under treatment and are in stable condition.

People who may have come into contact with the above-mentioned patients have also been traced for further management.

"The government continues to call for heightened vigilance and adherence to measures announced including the restriction of non-essential movement, closing of non-essential businesses and suspension of travel between cities and districts," said the statement.

As health workers make efforts to contain the virus spread, the government continues to urge Rwandans to stay home and avoid unnecessary movement to avoid the transmission of the virus.

The government has also closed the airport to passenger planes and it is only open for emergencies and freight transport.

While some individuals may consider themselves healthy to recover easily, health experts warn that movement and physical interaction exposes more people to the ailment including those with lower immunity.

During the lockdown period that went into force on Sunday March 22, only markets and shops selling foodstuffs and other essential groceries will remain open.

Also open are hospitals, pharmacies, petrol stations, among others while public transport is limited to service the providers of these essential services.

However, the transporters have to observe the necessary precautions, including maintaining hygiene and ensuring passengers keep at least one metre between them.

Globally, over  378,000 coronavirus cases had been recorded by Monday, while the death toll was over 16,000 by press time, according to the World Health Organisation.

Over 101,000 people have been able to recover from the virus and discharged.