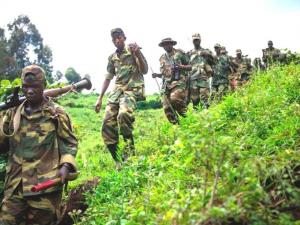 Democratic Republic of Congo has accused Rwanda of backing the M23 rebel group, which the latter denied Thursday as the Congolese army clashed with the militia in the east of the vast country.

Fighting with the rebel group erupted on several fronts this week in North Kivu, a conflict-torn eastern province of DRC, which borders Rwanda.

"Suspicions are crystallising that the M23 has received support from Rwanda," Congolese government spokesman Patrick Muyaya stated on Wednesday evening, after a crisis meeting with the prime minister.

Primarily a Congolese Tutsi group, M23 is one of more than 120 armed groups that roam eastern DRC.

It briefly captured North Kivu's provincial capital Goma in late 2012, before the army quelled the rebellion the following year.

But M23 resumed fighting this year, accusing the Congolese government of failing to respect a 2009 agreement under which its fighters were to be incorporated into the army.

"This is the height of brazenness, we cannot remain indifferent, we cannot say nothing," he told delegates at an African Union meeting in Equatorial Guinea on Wednesday.

But Rwanda has denied involvement. Government spokeswoman Yolande Makolo said the country has "no intention of being drawn into an internal matter of the DRC".

Clashes between the army and M23 continued near the Rumangabo camp on Thursday, local sources said.

In Goma, 50-year-old Kakule Kapitula told AFP he had come to the city because of insecurity elsewhere in the province.

"I am afraid because if they arrive, I will have nowhere to run," he said, referring to the rebels.

DRC and Rwanda have had a strained relationship since the mass arrival in the republic of Rwandan Hutus accused of slaughtering Tutsis during the 1994 Rwanda genocide.

Kinshasa has regularly accused Rwanda of carrying out incursions into its territory and of backing armed groups there.

Relations had begun to thaw after DRC President Felix Tshisekedi took office in 2019, but the recent resurgence of M23 violence has reignited tensions.

Tensions have also risen in Goma, an ethnic melting pot with a population of about one million, on fears of escalating violence.

General Francois-Xavier Aba van Ang, a high-ranking police officer in North Kivu, on Wednesday told city residents to prepare to defend themselves with machetes, according to a video posted on social media.

Muyaya criticised the remarks as "dangerous," however.

Resorting to "machetes, hate speech, stigmatisation is extremely dangerous and should be banned," he tweeted on Thursday.

M23 also stated that it was concerned by calls to violence.

"MONUSCO and the DRC government should stop this very dangerous slippage to avoid the genocide," it stated Thursday, using an acronym to refer to the UN peacekeeping mission in the DRC.

The army launched an offensive against M23 last week, after the militia apparently attacked soldiers as well as UN peacekeepers.

On Monday, Rwanda urged an investigation into an alleged rocket attack on its territory by Congolese armed forces.

Fighting between M23 and DRC's army erupted again on Tuesday north of Goma, and by Wednesday had spread to other areas of North Kivu, including the Rumangabo camp.

DRC on Wednesday announced it had also requested an investigation through a regional body that monitors security incidents in Africa's volatile Great Lakes region.

It did not mention Rwanda by name, but said in a statement that shells had been fired into its territory "from the east to the west.”