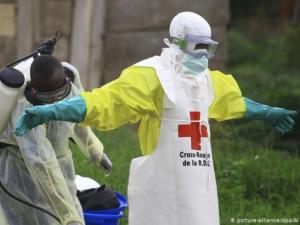 Prime Minister Edouard Ngirente on Friday received in his office the German Health Minister Jens Spahn and the two held discussions that aimed at mapping out areas of cooperation between the two countries.

The meeting, which took place in the new Office of the Prime Minister in Kimihurura, was also attended by the Minister of State for Public Health and Primary Healthcare Patrick Ndimubanzi.

“Germany has a very advanced relationship with Rwanda and there is already cooperation in the area of Ebola prevention and it is because of that that agreements will be signed with the Rwandan health ministry to have more intense cooperation,” Jens Spahn said.

In addition to the cooperation in fighting Ebola, the German Minister highlighted existing relations between the two countries in areas of economic development.

Meanwhile, he appreciates Rwanda for allowing refugees into the country whenever they feel their lives are threatened in their respective countries.

“We are very much impressed by what Rwanda is doing in the area of helping migrants. Compared to other countries, Rwanda is a country that takes responsibility and that is actually a good example for others,” he said.

State Minister Ndimubanzi stated that the two countries have in the past few months been working together to create awareness about Ebola but now efforts are being made to see that a centre is set up where people that have been infected are kept.

Rwanda has not recorded any case of Ebola but has been conducting drills in health facilities to ensure medics are ready in case is identified especially since the epidemic has been rampant across in the neighbouring Democratic Republic of Congo where over 2000 have died since last year.

Ndimubanzi also highlighted the three major areas that, going forward, are going to be the focus of the cooperation between the two countries.

“We are going to focus on increasing awareness and exchange of ideas between Rwandan and German medical practitioners in fighting Ebola, setting up of a centre that will host Ebola patients as well ensuring that we have a centre of excellence in fighting Ebola and similar outbreaks,” he said.