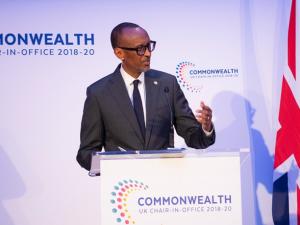 Rwanda will host the 26th Commonwealth Heads of Government Meeting (CHOGM), signaling an important step for a country which was admitted to the group a dozen years ago.

The Commonwealth Secretariat on Tuesday released a video announcing Kigali as the next host of the bloc.

Ambassadors sent to each other’s countries are also distinctly known as high commissioners and diplomatic missions known as High Commissions.

It will be the first time since 2007 that the CHOGM meet will be returning to the East African Community bloc. Uganda hosted the 20th meeting in Kampala in 2007.

The next CHOGM summit, to be held at the Kigali Convention Centre starting June 22, 2020, will focus on ‘connecting, innovating and transforming’, according to the announcement.

Rwandan President Paul Kagame and the Commonwealth Secretary-General Patricia Scotland said that the meeting will see leaders from all the 53 member states attend.

Themed ‘Delivering a Common Future: Connecting, Innovating, Transforming,’ leaders are expected to focus on governance and rule of law, ICT and innovation, youth, energy and environmental conservation as well as trade

“Building on progress since CHOGM 2018 in London, leaders are expected to discuss ways the contemporary Commonwealth can transform societies, in accordance with Commonwealth Charter values of democracy, multilateralism, sustainable development, and empowerment of women and youth,” the announcement said.

Rwanda, a former Belgian colony, was initially strongly francophone, until it joined the East African Community in 2005.

It would later be admitted to the Commonwealth at the Chogm Kampala and afterwards English was made an official language in the country.

Mozambique, a former Portuguese colony, is the other country not colonised by the British but is a member of the Commonwealth.

The hosting could bring Kigali another windfall in hospitality dollars as the conference also brings with its delegations and side events of civil society groups, and business leaders to push their agenda.

In the video message, President Kagame said his country will work to ensure adequate hospitality to guests “to make everybody feel Rwanda is an extension of their home.”

Ms Scotland added the conference will be good a chance for leaders to discuss better policies for the youth.

“I think the youth demographic we have now is a real opportunity. It’s going to be a very exciting chance for us to enable our young people to develop and deploy the skills they need so they can fulfill their potential.

“By connecting, innovating and transforming, the Commonwealth opens up scope for mobilizing the talent of people of all ages and backgrounds.”

With about 2.4 billion people, the Commonwealth could make a significant market for members but it currently faces competition from emerging powers like China who have equally gone on to establish contacts with these former colonies.