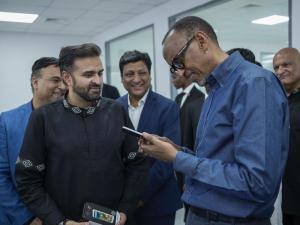 Rwanda’s Mara Group launched two Smartphone on Monday, describing them as the first “Made in Africa” models and giving a boost to the country’s ambitions to become a regional technology hub.

The launch of a Smartphone manufacturing plant in Rwanda by Mara Phones is a significant milestone in Rwanda’s journey in the production of technology gadgets.

This, according to President Paul Kagame, is part of the broader Made in Rwanda initiative, on which the country has embarked on.

Kagame was speaking on Monday at the launch of the Mara Phones production plant at the Kigali Special Economic Zone in Gasabo District.

It is the only facility on the African continent where Smartphone are manufactured.

The Head of State welcomed the development noting that the phone joins a growing list of high-quality products made in the country.

“The Mara Phone joins a growing list of high-quality products that are made in our country. Producing Smartphone is not a simple matter. Around one thousand individual components are involved as we have been taken through the whole process.

The plant is therefore a complex manufacturing operation requiring significant technical skill and expertise, said the Head of State, adding that, “it is another milestone on our journey to high-tech, “Made-in-Rwanda” industry,” the President said.

The development is expected to boost ownership and use of Smartphone in Rwanda which among other things improves access and delivery of public services as well as financial inclusion.

To increase uptake and use of public services, the firm is integrating services such as Irembo into the phone as a feature.

“The Smartphone is no longer a luxury item. It is rapidly becoming a requirement of everyday life. That trend is bound to increase in the years to come, as more and more services migrate to digital platforms.

In Rwanda, we have Irembo which is already the citizen’s primary gateway for many public services. Integration of Irembo into Mara Phones is an innovative feature. The percentage is still really low of Rwandans who are already using Smartphone, but we want to enable many more who would like to, and this is why dealing with cost and quality is very important,” he said.

To ease ownership and access, the manufacturer will work with local banks to allow buyers pay in installments.

“The product is backed by a warranty and the price can be paid in installments over two years. They have tried to make it as simple and possible for Rwandans as they could,” he said.

The firm’s investment in the plant, said to be over USD 50M is also in line with the country’s path for constant innovation and development.

“Our world is changing fast. Keeping pace requires constant innovation. This is the path Rwanda has chosen for our development. The investment by Mara Phones Group is therefore in perfect harmony with our focus on science and technology, as the key drivers of our economic transformation,” Kagame said.

The Head of State called on private sector players to continuously seek to be competitive globally.

“The private sector is the engine of the progress we desire for our continent. We must aim to compete regionally and globally, at the high-end of the technology spectrum,” Kagame said.

The firm is planning on exporting phones to the region and beyond.

Eddie Sebera the Country Manager of the firm said that they were already in talks with partners from countries such as Angola, DR Congo and Kenya among others for exports.

The firm is a manufacturer as it produces its own chips and other phone components.

So far, about 200 people are employed at the firm with 90 per cent of them being Rwandans. At full capacity, the firm will employ up to 650.

Ashish Thakkar, the Chief Executive Officer of the firm said that they seek to be a dominant player in the continent hence investing in high-quality production.

The Minister of ICT and Innovation Paula Ingabire said that beyond tax incentives, the Rwandan government works with investors such as Mara to establish ideal conditions for market entry including linking them to markets, matching labor demand and supply among others.