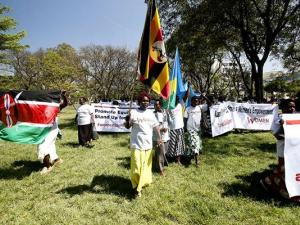 Rwanda and Tanzania are among six countries in Africa seen to be working towards securing land rights to at least 30 per cent of their women by 2025.

According to a report by the Africa Land Policy Centre, these six countries—the rest being Botswana, Ethiopia, Senegal and Malawi — have or are working on the policies, institutional and legal frameworks to ensure women have equal access to land.

They also have mechanisms to collect sex-disaggregated and specific data on women’s land tenure security.

“These countries have harmonised legal framework in favour of women’s land and property rights with a focus on gender-responsive inheritance laws. They are also undertaking land reforms that will avail equal opportunities for women to exercise and enforce their rights,” said Joan Kagwanja, a coordinator at the Africa Land Policy Centre (ALPC).

The report, prepared by the UN Economic Commission for Africa, AU Commission and ALPC and presented at the third land and policy conference (November 25 — 29) in Abidjan, shows that these countries have policies and mechanisms of resolving poor land administration such as undeveloped systems, complex administrative processes, transparency hence eliminating the opportunities for corruption.

Women in Africa, the report says, are not adequately represented nor do they meaningfully participate in land governance processes as women are typically not considered as the public face of the family and land administration is a public activity.

They also have difficulty enforcing their rights to land because of a lack of information about their rights or how to exercise them; lack of a fair mediator or dispute resolution system, inability to access enforcement mechanisms due to the cost or distance or other time consuming duties; or unwillingness to enforce rights against other family members.

According to the report, data scarcity limited nationally representative sex disaggregated comparative data has prevented us from better understanding the nature and scale of women’s land tenure insecurity.

“Reliable comparable data would allow us to both better qualify the problem as well as identify opportunities for addressing the problems,” says the report.

The report indicates that women’s land tenure security is critical for their empowerment and for unlocking transformative social and economic benefits in accordance with the AU Agenda 2063 and Agenda 2030 for the Sustainable Development Goals.

Women continue to contribute significantly towards agricultural production in Africa but in some circumstances are not able to enjoy their rights to land. It is, therefore, a reality that women and men still do not enjoy the same rights over land,” Ms Kagwanja added.

At the Land Policy conference, Josefa Sacko, AUC commissioner, Agriculture and Rural Economy, said there is still gender gap in access to land in Africa.

“We need to ensure that the way in which land is distributed and used plays an essential role in promoting sustainable development and achieving peace and stability on the continent,” said Ms Sacko.

“For far too long, African women have contributed to the development of our continent without due recognition, adequate support and sufficient benefits. This is in part due to gender-based disparities in access to productive resources and opportunities such as land.”

In 2017, African governments adopted a resolution to grant documented land rights to at least 30 per cent of their female populations by 2025. Reports indicate that women contribute 70 per cent of Africa’s food production and account for nearly half of all farm labour.

Hirut Girma, land and gender expert at ALPC said that if all African countries committed to implementing the resolution agreed upon in 2017, this will be a big win not only for the women but for the community.

“Under the resolution women will be allowed to inherit and rightfully own land without fear,” said Ms Hirut adding that to achieve this governments will have to amend their laws and policies to grant women their right to own land.

She said that inheritance remains an important method of land acquisition for women even though inheritance laws and customs often favour men over women.

Women are less likely to be allocated land through community distribution or inheritance due to norms related to ancestral lands, and statutory legal frameworks may also be discriminatory or poorly drafted, including land law, family law, and civil law.

“Conflicting and overlapping legal and regulatory frameworks and jurisdictions over land and resources can create the potential for opportunistic behaviours. These behaviours may further exclude women and other vulnerable groups,” said Ms Hirut.