Rwanda Teaching Inmates How To Proudly Return To The Community 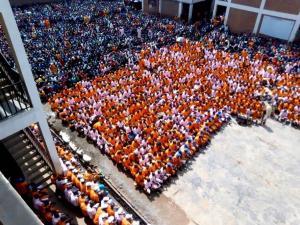 Rwanda Correctional Services(RCS), the public institution which manages prisons has completed a six month curriculum which will help inmates who are about to complete their jail term to return into the society in dignity.
The curriculum provides the inmates with technical skills that would allow them to be competitive on labor market once they return in the community.

It further trains the inmates to manage their emotions and overcome any potential trauma crisis that they may face.
“We intend to bring uniformity in this rehabilitation/correction exercise so that inmates benefit the same package national wide,” said Frank Kayitare, country coordinator of Interpeace, an international organization for peace building that supports locally led initiatives around the world which designed the curriculum.

He said this program will enable inmates to benefit similar information on reintegration into the community after concluding their jail term.
“Most of the sessions in this program have been in use, but they were scattered and thus, not equally shared among the inmates. We are harmonising the content to benefit every inmate equitably,” Kayitare said.

According to Kayitare, the program is a result of a thorough survey among the former inmates who concluded their sentence, those who are still serving the sentence and government players to come up with a relevant package susceptible to bring change in the life of an inmate.

“The program intends to teach inmates to accept their current condition and to embrace new life in the society which seeks to curse them,” saif Yves Seziregeya, the deputy principal in charge of academic affairs at the Institute of Legal Practice and Development.

The President of Prison Fellowship Rwanda Chapter Bishop John Rucyahana said: “This program will benefit both the inmates and all of us who accompany them.”

The Commissioner General of Prisons Juvenal Marizamunda said, that indeed, theirs was mostly to concentrate on technical and vocational education-TVET, but a program that seeks to bring radical change in the life of a prisoner has never been effective.

There are in Rwanda slightly more than 80,000 inmates who include 5,500 women(7%). All the inmates are comprised in 13 prisons. They include seven all men prisons, two all women prisons, three mixt prisons and one juvenile prison.
On top of these, Rwanda has 2 camps of people under public interest services as a punishment.
https://www.ktpress.rw/2022/07/rwanda-teaching-inmates-how-to-proudly-re...