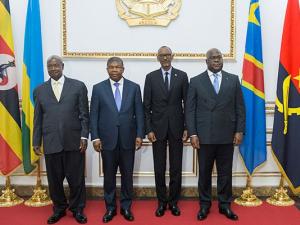 Ugandan President Yoweri Museveni has said that mutual talks between Uganda and Rwanda to revive cross border trade are progressing.

“Recently we met the Rwandan leader in Angola and we discussed about the border issue. Leave it to us. Talks shall continue until the matter is completely resolved. It does not make sense to keep talking on radios but what is important is to ensure that the border issue is resolved,” said President Museveni.

“The issue took me to Angola to meet President Kagame and other leaders and I will not reveal what we discussed.”

In February Rwanda closed Gatuna border post for cargo trucks. But the border remained open for all other small cars and buses.

Kigali said that the border was closed for the completion of the one-stop border post.

Rwanda also advised its citizens to not travel to Uganda, accusing Kampala of illegally arresting, torturing and deporting its citizens.

Uganda on the other hand, is accusing Rwanda of spying on its territory and infiltrating its security agencies.

On 24th July Uganda police and state operatives arrested over 40 Rwandans in an operation mounted by the country’s military intelligence operatives.