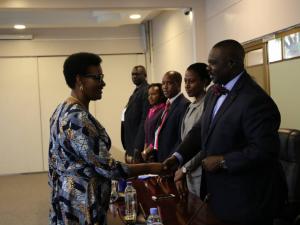 A high-level Ugandan parliamentary delegation has met Rwandan counterparts in Kigali and the two sides say it is time for the legislative arms to intervene in the ongoing standoff between the governments.

Speaker of Rwanda’s Chamber of Deputies Donatile Mukabalisa met Wednesday with Uganda Parliament Deputy Speaker Jacob Oulanyah on the sidelines of ongoing African Caribbean and Pacific-European Union Parliamentary Assembly in Kigali. The assembly has been taking place since November 14, ending this Friday.

Mukabalisa said in their courtesy meeting that Rwanda and Ugandan Parliaments have the opportunity to make a contribution in the ongoing efforts to ease tensions.

Since February, governments in Kigali and Kampala are at loggerheads, accusing each other of spying and supporting each other’s rebels.

Ugandan President Yoweri Museveni has refused to make any public statement about the standoff. And he has also ordered his officials not to say anything – leaving it to Foreign Minister Sam Kutesa, who in at least 3 statements accused Rwanda of imposing trade embargo on Uganda.

Rwanda was the first to come out publicly. President Paul Kagame himself has put forward “three outstanding issue”; support for Rwandan dissidents and rebels, arrest and torture of Rwandans, and confiscating Rwandan exports transiting through Uganda.

Uganda has deported dozens of Rwandans and dumped them at border – some in horrific conditions. In the past weeks, several people have been short dead by Rwandan border patrol as they attempted to smuggle goods into Rwanda.

Kagame and Museveni signed an MoU mediated by DR Congo President Felix Tshisekedi and Angola’s João Lourenço. However, Adhoc teams of ministers supposed to hold more talks are unable to meet. A second meeting has been postponed three times.

In the meeting with Ugandan parliamentary delegation, Mukabalisa said that some Rwandans still fear to travel to Uganda due to reports of kidnaps and torture.

“Considering the role of MPs, as Parliamentarians we should always put first the plight of the people we represent,” said Mukabalisa.

For his part, Oulanyah said “fake news” from both sides was not helping the situation either. It was instead escalating it.

In the Kagame-Museveni Angola MoU, and communiqué of the first ministerial meeting in Kigali, Rwanda and Uganda agreed to stop “negative propaganda” against the other in local media and social media.

However, the situation has only gotten worse. Both countries have blocked all online media from the other. Rwandan mainstream and alleged obscure sites are all blocked in Uganda. As are Ugandan platforms in Rwanda.

Deputy Speaker Oulanyah said: “Some of the things that came out from the press, we also just read them, and now-days there is so much fake news. We should all be vigilant of that.”

Despite these latest statements of concern by the leadership of both Parliaments, they are unable to influence anything.

There has been several debates in Ugandan parliament on the diplomatic tensions. But there has not been tangible action by the MPs.

In Rwanda, there has not been any parliamentary plenary session on the issue. Rwandan MPs have avoided even making individual statements on the tensions, leaving it all to President Kagame, his foreign ministers and Rwanda’s High Commissioner in Kampala Maj Gen Frank Mugambage.

As a possible solution to ease the quarrels between Kigali and Kampala, Oulanyah is suggesting the Sudan model to solve the crisis.

Two states should use the Sudan and South Sudan peace process approach which saw the two countries carry out regular exchange visits of representatives, said Oulanyah.