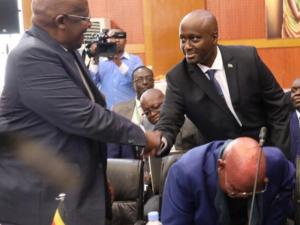 Rwanda and Uganda have agreed to resolve the outstanding issues which have affected relations between the two countries following the first Ad Hoc Commission meeting in Kigali on Monday, in what could be a major step towards the normalization of relations.

This was among  steps to implement the provisions of the Memorandum of Understanding (MoU) signed on August 21, 2019, in Luanda, Angola aimed at resolving tensions between the two countries.

The first meeting to form the AdHoc Commission to follow up on the implementation convened in Kigali on Monday, with delegations from both sides led by the Ministers of Foreign Affairs as well as other high ranking officials.

The Minister of Local Government Prof. Anastase Shyaka, the Minister of Justice and Attorney General Johnston Busingye and the Secretary-General of the National Intelligence and Security Services (NISS) Maj. Gen Joseph Nzabamwita were also part of the Rwandan team.

Also on the Rwandan delegation was Rwanda’s High Commissioner to Uganda, Maj. Gen Frank Mugambage, and Anaclet Kalibata, the Director-General of External Intelligence and Security Services while the Ugandan delegation was also composed of the Minister of Internal Affairs Maj. Gen J.J Odongo, Attorney General William Byaruhanga and the High Commissioner to Rwanda Olive Wonekha.

Nduhungirehe reiterated the key concerns that led to the deterioration of ties between Rwanda and Uganda, indicating that these must be addressed for the two countries to progress and restore good neighborliness.

“Nonetheless, there are concerns that continue to hinder our bilateral relationship and good neighborliness. Those concerns include active support provided to elements hostile to Rwanda, the arbitrary arrest, detention and torture of innocent Rwandans in Uganda and acts of economic sabotage,”

“The Luanda MoU was entered into so that these concerns are addressed,” Minister Nduhungirehe said, adding that Rwanda remains committed to doing her part.

In their opening remarks, both Ministers emphasised that Uganda and Rwanda share historical ties dating many centuries back and expressed the political will by both countries to resolve outstanding issues and fully normalise relations.

Minister Kutesa said that the people of the two countries, more than anybody else, are anxious and need to see progress in the normalisation of relations.

“The people of our two countries, more than anybody else, are anxious and need to see progress. Therefore we should consider immediate steps to normalize relations,”

“I wish to reaffirm that Uganda is committed to a peaceful and friendly co-existence with Rwanda. It is our expectation that this meeting will launch the process of the normalization of relations in a tangible way,” Minister Kutesa said, adding that meeting in Kigali and the establishment of the Ad Hoc Commission should be viewed as part of an important process towards the implementation of the Luanda MoU.

Also present in the meeting was Angolan Minister of External Relations Manuel Domingos Augusto and the DR Congo Deputy Prime Minister and Minister of Interior, Security and Customary Affairs, Gilbert Kakonde Malamba who attended as facilitators.

The Angolan Minister, speaking on behalf of President João Lourenço of Angola, who initiated the reconciliation process, said that he is optimistic that the talks in Kigali will lay a firm foundation for Rwanda and Uganda to begin the rapprochement process to fully restore ties between the two countries.

“The understanding between Rwanda and Uganda is very important because it goes beyond bilateral relations. We know the importance of these two countries in the peace and stability of our region and continent,” he said, adding that the entire world is watching to see what comes out of the meeting in Kigali.

“Let us be ready to show the world that we are capable of not only beefing up peace and stability in our countries but most importantly maintaining it and using it for our development and cooperation on the framework of regional integration and for the development of our continent,” Augusto said, adding that meeting in Kigali should produce the expected results.

“It is our duty to see that Uganda and Rwanda address the existing issues between them. As good neighbors, we cannot sit back and watch as the neighbors’ house burns,” he said.

The MoU set out the terms the two countries will follow in the reconciliation process, including both parties undertaking to respect the sovereignty of each other.

Among other things, both countries were expected to refrain from actions conducive to destabilization or subversion in the territory of the other party and neighboring countries, thereby eliminating all factors that may create such perception, as well as that of acts such as the financing, training and infiltration of destabilization forces.

The MoU further states that the two countries commit to protect and respect the rights and freedoms of nationals of the other party residing or transiting in their national territories, in accordance with the law of that country.

The MoU also stipulates that both countries will resume the cross-border movement of people and trade as soon as possible, for the development and improvement of the lives of their populations.

The signing of the MoU was followed by more tensions including blocking of news sites, while more Rwandans continued to be illegally dumped on borders with Uganda.

Addressing the press after the meeting, Rwanda’s Minister of State in charge in charge of the East African Community (EAC) Amb. Olivier Nduhungirehe, who led the Rwandan delegation and the Ugandan Minister of Foreign Affairs Sam Kutesa said that Rwanda and Uganda will play their role in the implementation of the MoU in the interest of regional integration.

Gearing up to today’s meeting, Uganda continued to expel Rwandans from Uganda in droves from detention centers where they have been held without trial, something Rwanda has constantly protested.

Rwanda has maintained that the only way to normalize relations would be for Uganda to address the raised concerns.

“Both parties agreed that due processes will be followed in dealing with each other’s citizens” the communiqué reads in part, adding that “both parties reiterated their commitment to refraining from any acts of destabilisation against each other”.

Among other things, Rwanda and Uganda agreed to finalise the extradition treaty in order to provide a framework for the future exchange of criminal fugitives and to cease all forms of hostile propaganda in both mainstream and social media.

Minister Nduhungirehe did not say if the advisory discouraging Rwandans from travelling to Uganda will be lifted following the Kigali resolutions but said it is one of the resolutions that will be looked at ahead of the Kampala meeting.

“As I have said before in statements I have issued, even in Kampala, Uganda does not harbour, will not harbour, it will not entertain, it will not encourage dissidents that want to destabilize and anyone who does that on our territory will be dealt with in accordance with the law,” Kutesa said.

Minister Nduhungirehe emphasised that the issue of Rwandans detained in Uganda must be addressed alongside stopping all kinds of support to negative groups and ending all forms of economic sabotage.

Kutesa said that the countries should be meeting more to discuss development projects rather than meeting to address problems.