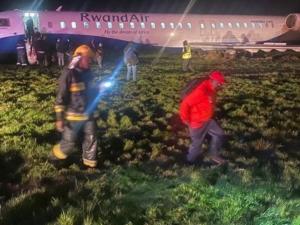 A RwandAir passenger plane with about 60 people on board skidded off the runway while landing at the Entebbe International Airport in Uganda early Wednesday, officials confirmed.

The passengers and crew disembarked safely, they added.

The RwandaAir flight from Nairobi overshot the runway as it was landing at 5.31am, according to airport sources.

In a statement, Rwanda’s national carrier RwandAir, said, “RwandaAir flight WB464 upon landing at Entebbe International Airport early this morning was involved in a runway excursion as a result of bad weather. All passengers and flight crew deplaned safely with no reported injuries.”

“All efforts are underway to remove the aircraft from the runway strip so that the main runway can return to full use,” the aviation authority said in a statement.

While investigations are ongoing to establish the cause of the incident, sources at the airport blamed poor markings on the new runway and poor visibility instigated by the morning downpour.

This is not the first time a plane has skidded off the runway.

In January 2019, an Ethiopian Airlines (Boeing 737-800) carrying 139 people skidded off the runway when it landed at just after midnight.