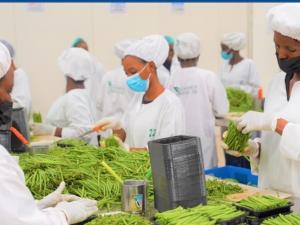 Rwandans exporting products to European countries are incurring losses as a result of the declining value of the euro and the British pound (£), The New Times has learnt.

“The crashing of UK [pound] and euro against a dollar and local currency has negatively affected the contracts previously established by exporters in the business,” Robert Rukundo, Managing Director of Almond Green Farm Ltd, a local horticulture export company, told The New Times.

“This comes at a time when we have issues of high freight charges and high fuel cost that has also increased cost of operations,” added Rukundo, who is also the Chairman of Horticulture Exporters Association of Rwanda.

Rukundo said that last week, a pound was exchanging for Rwf1,204 against Rwf1,065 that was offered this week. That means, for each euro exchange into Rwandan francs, he lost Rwf135 – to be able to pay produce from the local producers using the local currency.

The pound value has been volatile, based on the exchange rates from the National Bank of Rwanda.

This, he said, requires to spend more pounds or euros in order to get US dollars (US$) to pay airlines for the shipment of products and for other purposes such as packaging materials, adding that he exports to countries including UK, France, Germany, and Switzerland.

Rwandan exporters are paid using euro or pound by buyers in Europe. They then have to exchange those currencies for Rwandan franc (Rwf) to buy from the local producers.

In the process, they said, they are incurring losses.

“This situation is having a negative effect on us [as exporters],” Rukundo said.

“You understand that if you are to be paid like £10,000 and convert it into Rwandan francs or US dollars, you will suffer a loss,” he said, adding that he lost about Rwf2 million through exchange rates on a payment last week.

Also the pound dropped to a record low against the dollar as markets reacted to the UK’s biggest tax cuts in 50 years – falling close to $1.03 early Monday, September 26.

Rukundo said it takes US$2.4 to get a kilogramme of his horticultural products exported to Europe by KLM (Royal Dutch Airlines). While he used to spend £1.9 to get the US$2.4 airfreight charge covered per a kilogramme, he said he uses £2.3 currently.

This data implies that he has to pay 21 per cent more on airfreight transport than before, because of the Pound value drop.

Jean-Malic Kalima, Chairman of the Rwanda Mining Association (RMA), said that most of the traders to which local mining firms sell minerals are Europeans.

“It [the decline of the Euro and the Pound] has a negative impact on us, the exporters; but it is good for the importers because they can access products from Europe at a lower price,” he said.