Rwandan pilgrims did not participate in Martyrs day celebrations 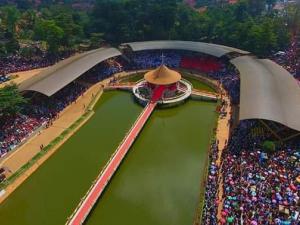 A diplomatic feud between Rwanda and Uganda that stopped most cross-border movements between the two countries has now continued to escalate after Rwandan authorities also blocked pilgrims to attend Martyrs day fete in Kampala.

Different groups who were trekking to Namugongo from various parts of Rwanda were barred from crossing to Uganda by Rwandan, a situation that has had a huge effect on daily life for families in both countries.

The row between the two neighboring countries has been simmering for the past two years but seems to have escalated when Rwanda closed its borders recently.

Both countries have traded accusations of interference in each other‘s affairs.

The spokesperson of Catholic Church in Rwanda, Father Jean Damascene Maniraho told BBC that a huge number of Rwandans used to go to Uganda to celebrate Martyrs day, but today they didn’t do so.

However, some local churches in Rwanda organised fellowships to help catholic church members who have not got chance to go to Uganda, to celebrate martyrs day in their home country.